Two cars were attacked by the rock-throwers, causing damage to both and leaving the mother with a light injury to one of her legs. 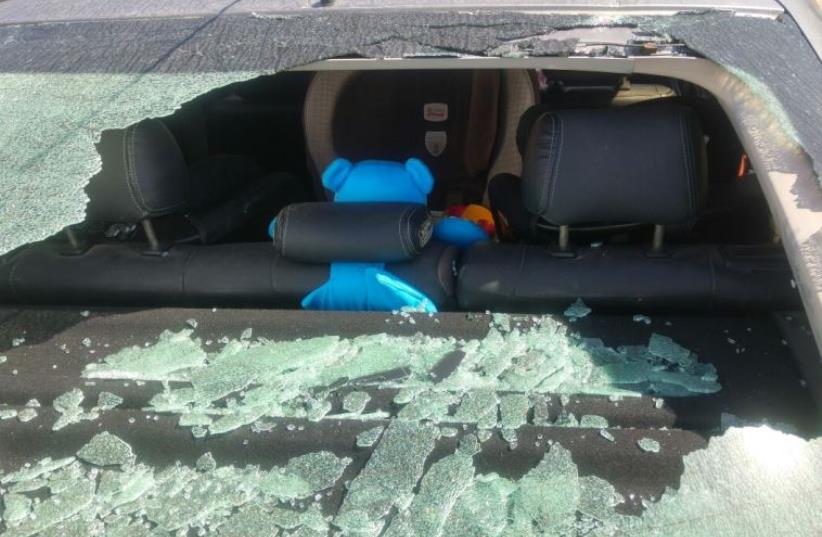 Rocks and stones severely damaged the car, just behind where the baby's car seat was situated
(photo credit: GUSH ETZION REGIONAL COUNCIL)
Advertisement
Erica Marom, of Tekoa, feels lucky to be alive after she and her family came under a barrage of stones and cement blocks thrown at their vehicle by a group of Palestinian school kids on Thursday that left her and her six-month old infant lightly hurt.“It was very, very scary and it’s a miracle we survived this attack. They were trying to kill us,” Marom, a former editor at The Jerusalem Post, said on Thursday evening.Marom said she was in the passenger seat and her husband, Moshe, was driving with their three children in the back seat outside of Tekoa, returning from a visit with her parents, when she told Moshe to slow down because there were school children in uniforms walking on the side of the road and she feared he might accidentally hit one.All of a sudden, she said she heard a series of loud booms “and they were smashing our car with cement blocks, they weren’t even rocks.”The car sped away from the scene with its back windshield shattered and Erica in full terror for her kids, especially six-month-old Adir, who was in a rear-facing child seat. When they got to a safe spot, she said they saw that he had glass all over him and that all the children were screaming.Marom, a New York native who made aliya 10 years ago, has lived in Tekoa for about 18 months but, she said, they never have experienced anything like this she said.“This is happening far too regularly, it’s all the time and it’s serious. It’s not just people throwing rocks, its kids throwing cement blocks at other kids, other innocent children. This needs to stop.”Adir was lightly hurt in the attack, as was Erica, who was cut by glass on one of her legs.A couple hours after the attack the Judea and Samaria police said they had arrested a suspect - a 15-year-old who they said confessed to the crime.Police said the youth was walking home from school with friends when they decided to head out to a nearby road and throw rocks at Israeli cars. Police were searching for other suspects.The security officer for Tekoa sent out a statement on Thursday saying he was traveling in a second car and that was damaged in the attack.He indicated that he saw the first car traveling behind a slow moving Palestinian car and that at the moment the Palestinian car passed the group of Palestinian youths (which he estimated to be between eight and 12 years old), they started throwing rocks at the car. He said some eight stones and a large block of cement were thrown at the car within two seconds.The incident came a week after the security cabinet approved a number of tougher steps to counter rock and firebomb-throwers, including the easing of open-fire regulations.The 10-member cabinet voted unanimously in favor of the steps, which include a minimum four-year prison sentence for those over 18 years old caught throwing deadly objects, as well as minimum fines and penalties for minors. They also discussed the possibility of imposing fines on parents of minors arrested for rock-throwing and firebomb attacks.