The new mode of travel would bring financial savings to taxi users without hurting the profitability of the industry itself. 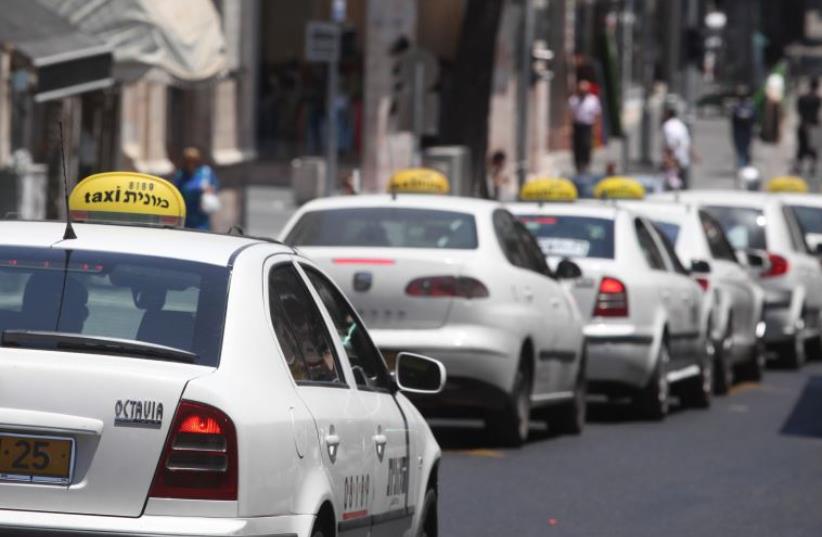 Taxis on Jerusalem's King George Street
(photo credit: MARC ISRAEL SELLEM/THE JERUSALEM POST)
Advertisement
In a move aimed at saving consumers money and reducing traffic congestion, the Cabinet unanimously approved a proposal by the socioeconomic panel on Tuesday for enabling “cooperative taxi rides.”The new program, advanced by Finance Minister Moshe Kahlon, advocates an entirely new form of public transportation – special taxis for passengers willing to share their trips with others heading to nearby destinations.The new mode of travel would bring financial savings to taxi users without hurting the profitability of the industry itself, according to the Finance Ministry.“In addition to lowering prices for the consumer, the service would make taxi use more worthwhile in comparison to private car use, thereby bringing about a decrease in congestion on the roads,” the ministry said.In order to ensure the quality and reliability of the new service, the shared taxis would be available by advance order only, rather than through street pick up, the ministry explained. Passengers would be able to view the approximate cost of their trip – which would be significantly lower than that of a private taxi ride – as well as their pickup and estimated arrival times.Today, Israel’s taxi industry includes about 20,000 registered vehicles, which carry an estimated 80 million passengers annually, the Finance Ministry information said.The industry at the moment offers only two options to passengers: the use of a taxi on a fixed, licensed route and the use of a “special” taxi that transports the passenger to his or her requested destination according to a meter rate.“This means that the majority of trips are made with a single passenger,” the ministry said. “The inability to share rides prevents a decrease in fares, bringing lower profitability to the industry and a surplus of vehicles on the road.”