"There is no way a soldier should have to think twice about going anywhere in the State of Israel.” 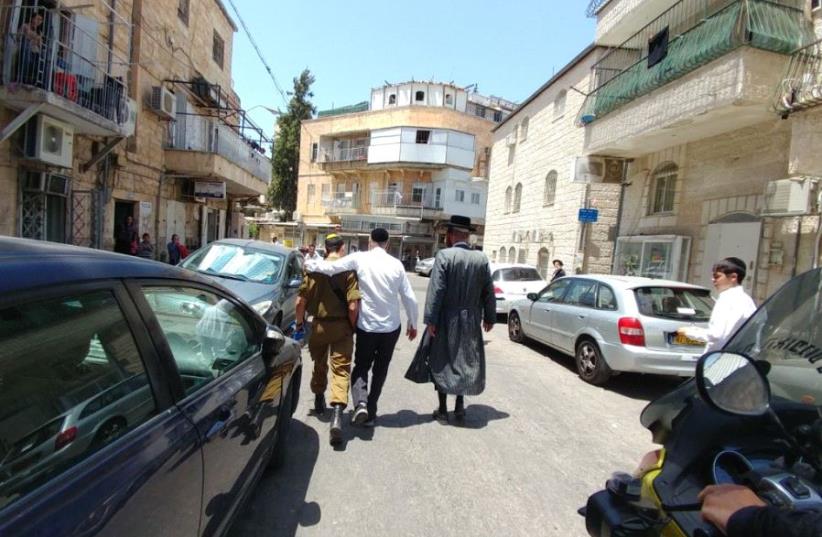 A TOLDOT AHARON Hassid (right) and another haredi man escort the son of former MK Dov Lipman, who is a soldier, away from an anti-Zionist mob in the capital’s Mea She’arim neighborhood on Friday.
(photo credit: HAREDI EXTREMISTS PROTESTS GROUP)
Advertisement
An IDF soldier and the son of former Yesh Atid MK Dov Lipman was the subject of severe harassment and, according to the police, violence in the radical Mea Shearim neighborhood of Jerusalem on Friday.The Golani Brigade soldier, aged 20, was in uniform when he walked into the neighborhood and entered a bookstore on Mea She’arim Street. He was however noticed entering the store and a large, angry mob of ultra-Orthodox extremists soon gathered outside, waiting for him to exit.The soldier was made aware of the mob and was eventually ushered out of a side entrance, but still within view of the crowd, which soon began hounding and harassing him, surrounded him and shouted curses and insults at him.According to the police, stones were thrown at the soldier, although he himself says he did not see any stones thrown.According to the former MK, his son told him that a man from the Toldot Aharon Hassidic group, generally known to be one of the radical communities in the neighborhood, intervened and, with another two haredi men, led him away from the mob.Two local volunteers from the ZAKA rescue and recovery organization on motorbikes also pulled up alongside the soldier to escort him away.The police received several emergency calls regarding the mob chasing and harassing the soldier, and dispatched several policemen on foot as well as an ambulance.Extremists tried to prevent the passage of the ambulance, but it eventually found its way to the soldier and he was taken into the ambulance together with the policemen and spirited away.Speaking to The Jerusalem Post, former MK Lipman said his son had not thought anything of going into Mea She’arim in uniform and it had not crossed his mind that it might stir up trouble, and that he had simply wanted to obtain a book as he has done when a civilian and studying in a yeshiva.Lipman insisted that the ongoing attacks against soldiers and other security personnel by haredi extremists have to be tackled by the legislature and through the security services.“When I gave him a bracha [blessing] on the day he was drafted, it never entered my mind that I was asking God to protect him from Jews,” said Lipman.“We can’t have a situation where soldiers are abused like this. It’s a small minority [carrying out such attacks], but it needs to be sorted out. There is no way a soldier should have to think twice about going anywhere in the State of Israel.”The police said that it would continue “to fight against all elements who are violent toward those in uniform at any time and in any place, and will not allow extremist elements to take the law into their own hands and to harm people who chose to serve the state.”