Some Jerusalemites brave the blizzard

Jerusalem took on the eerie visage of a ghost town during winter weather conditions on Wednesday.

By DANIEL K. EISENBUD
Snow in Jerusalem, January 7, 2015
(photo credit: REUTERS)
Advertisement
Amid intermittent rain, hail, lightning and a few snow flurries, Jerusalem took on the eerie visage of a ghost town Wednesday, as residents largely opted to stay at home – with the exception of a few brave souls who ventured out to warm themselves over coffee, hot cocoa, and “Snow Margaritas.”Apart from an occasional light rail train passing by, the city’s normally bustling Jaffa Road initially appeared to be devoid of life. However, sprinkled among the hundreds of closed shops, coffee houses were relatively teeming with life. 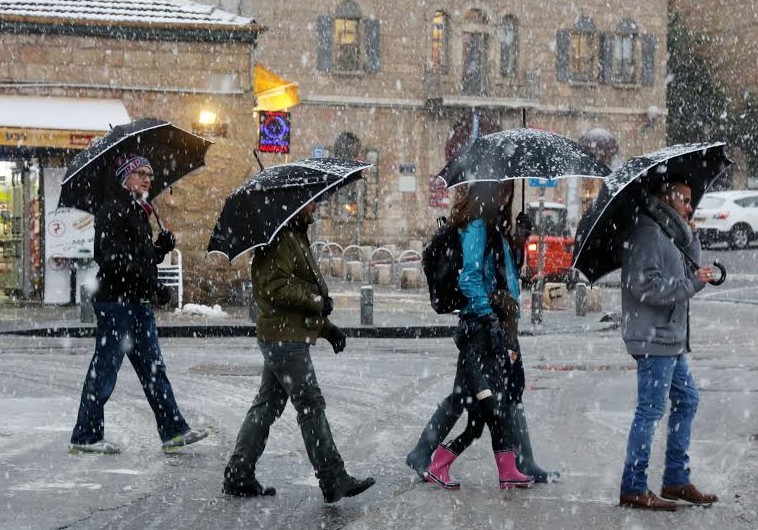 As he sat at a table with friends at Coffee Bean and Tea Leaf, lone soldier Levi Hirsch, originally from Atlanta, said he is grateful that his military base granted him early leave to avoid being trapped there for the weekend.“My base is near Ma’aleh Adumin, so they wanted to make sure we got to Jerusalem before the storm got bad,” said Hirsch. “So, I’m happy to be here.”Asked his opinion about the city’s planning to deal with the storm, which has shut down major highways, Hirsch noted a considerable improvement compared to last year’s catastrophic storm, Alexa.“I think Jerusalem is doing a very good job of learning from last year by shutting down the highways so people don’t get stranded again,” he said.Hirsch’s friend, Hannah Laskow, also a lone soldier given early leave from her northern base, also praised the city’s response to the unusual weather.“Since this part of the country isn’t used to snow, they’re learning from their experiences from last year and doing a great job,” she said. “This year they let civilians know of bus closings and have been really careful about not getting people stuck.”Moreover, Laskow said, she was taken by the country’s ability to work together under duress.“Every piece of Israel is working together – from plows clearing the streets, to the IDF being considerate by letting us out early,” she continued.“They know we’re on our own and need our weekends off.”“No other country in the world would let their soldiers leave early to make sure they’re home and safe,” she added.Noting that most of the city had shut down, the café’s owner, Ronen Turgeman, said he decided to keep his doors open to offer a safe refuge for homebound patrons.“I’m open all day, because I enjoy people coming in and enjoying the place,” he said, as a dozen or so customers nursed coffee and hot chocolate.“It’s hot inside and cold outside, so it’s nice to see people wrap their hands around their cups and stay warm.”A few minutes later, as thick snowflakes finally began accumulating, blanketing Jaffa Road, 12-year-old Nir Tzelnick, his six-year-old brother, Itamar, and 15-year-old sister, Shir, excitedly made snowballs.“It’s very nice and lots of fun to throw snowballs, and I hope there will be enough so I can build a snowman and make a snow angel,” said Nir.Itamar, who said he saw his first major snowfall last year, added that he hopes to make an igloo and then go inside it to sip hot chocolate.Asked how much snow he hopes will fall, the little boy raised his right arm high above his head with a big smile: “This much!” he said.Meanwhile, Shir said she was not thrilled about the cold, but conceded that the weather afforded her one major benefit.“I don’t like that it’s freezing outside, but I do like that there’s no school,” she said.“Also, I’m supposed to have an English test tomorrow, and I’m happy not to have to take it,” she added with a wry grin.Across the street, a relatively subdued watering hole called Mike’s Place was serving “Snow Margarita’s” to a handful of patrons sitting at the bar.“We take the snow from outside to make them, so it’s like a slushy Margarita,” said a bartender standing outside the front door. “We’re waiting for a fresh batch so we can make more.”“Ask them about the Snow Margaritas!” he said as he pointed to yeshiva students Sam Edelmuth and Yitzy Baum, sitting quietly at the end of the bar. “They had one earlier.”Asked his opinion, Edelmuth said he is more than pleased.“The Snow Margarita is among the rarest drinks in the world, because it’s made with snow from Jerusalem,” he said. “It is exquisite.”