In addition to his roles as a prominent zoologist and evolutionary biologist at Tel Aviv University, Zahavi was among the founders of the Society for the Protection of Nature in Israel. 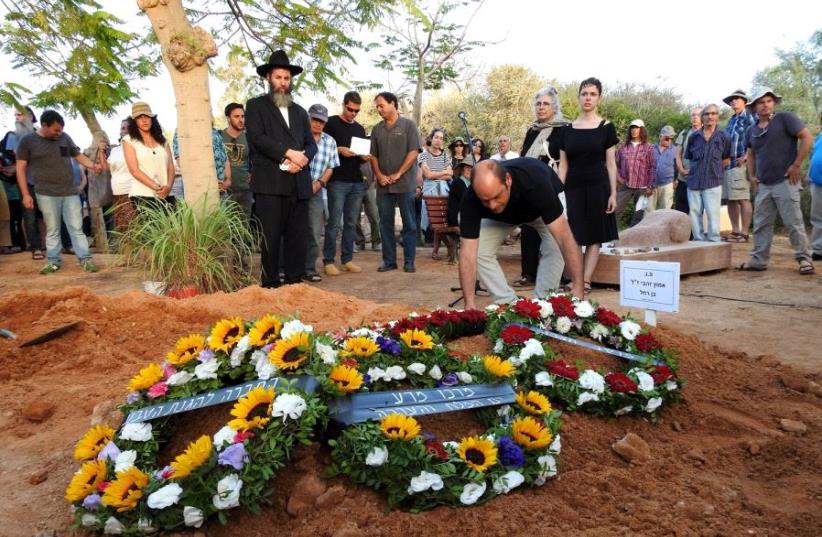 The funeral of Amotz Zahavi.
(photo credit: DOV GREENBLAT)
Advertisement
Hundreds of naturalists, scientists and academics gathered in the Arava’s Hatzeva community on Monday night to honor the memory of Prof. Amotz Zahavi, who died on Friday at the age of 89.In addition to his roles as a prominent zoologist and evolutionary biologist at Tel Aviv University, Zahavi was among the founders of the Society for the Protection of Nature in Israel. Born in 1928, Zahavi received numerous awards for his groundbreaking work throughout his career and devoted much of his time to researching the unique social behaviors of the Arabian babbler bird.“Amotz was one of the founders of the Society for the Protection of Nature in Israel and one of its pillars for many years,” said SPNI executive director Iris Han. “Zahavi was a naturalist, a scientist and a pioneer, who was well positioned to integrate groundbreaking research with conservation activities in Israel.”Zahavi is perhaps most known for developing “the handicap principle” in 1975. Contrary to the principles of Darwinian evolution, the handicap principle proposes that organisms may choose mates with extravagant and seemingly disadvantageous traits, like a peacock’s tail – as such features are indicative of honest, reliable signals and demonstrate biological fitness according to sexual selection.Together with Azaria Alon, who died at the age of 96 in 2014, Zahavi founded SPNI in 1953, with the aim of establishing a public company with robust infrastructure that could coordinate various activities of nature conservation, according to the society. For many years, he served as SPNI’s secretary and headed the organization during its early years. When SPNI received an Israel Prize in 1980 for its contributions to the society and environment of Israel, Zahavi and Alon received special recognition.In honor of the 60th anniversary of the State of Israel, Zahavi received a lifetime achievement award for his contribution to the environment from the Environmental Protection Ministry in 2008. He also earned the International Fyssen Prize for the evolution of social communication in 2001, and a lifetime achievement award from the Israel Society of Ecology and Environmental Sciences in 2016.In recent years, Zahavi divided his time between his birding research at the Hatzeva Field School in the Arava and his home in Tel Aviv.