Another emphatic defeat for Maccabi TA

Still no group-stage goals or points for yellow-and-blue after 2-0 humbling in Portugal. 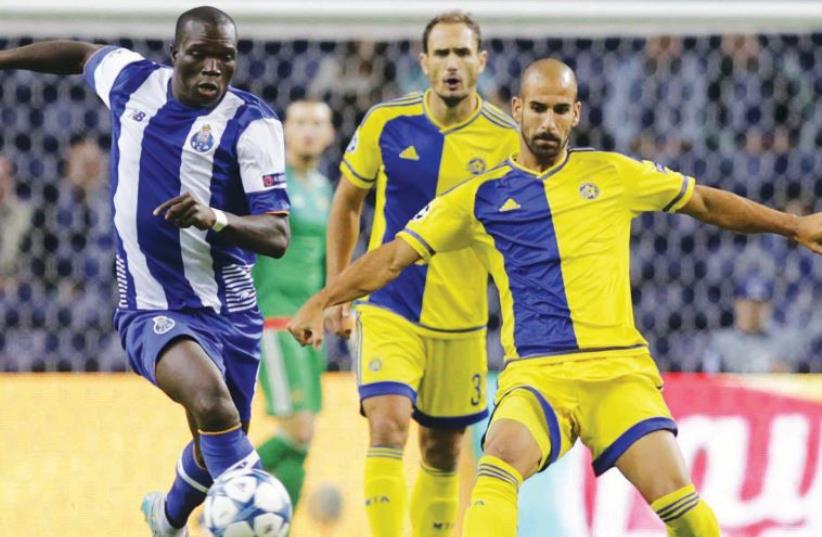 Porto forward Vincent Aboubakar (left) scored the opening goal last night against Gal Alberman (right)
(photo credit: REUTERS)
Advertisement
Maccabi Tel Aviv is still without a goal or a point at the halfway mark of its Champions League group stage campaign after losing 2-0 to Porto on Tuesday night.Maccabi remains in last place in Group G with zero points and a 0-8 goal difference, but at least it wasn’t outplayed the way it was in the 2-0 home defeat to Dynamo Kiev three weeks ago and in the 4-0 loss to Chelsea in its group opener at Stamford Bridge.The yellow-and-blue reached more scoring opportunities on Tuesday than in the first two matches combined, but yet again failed to find the back of the net. Goals from Vincent Aboubakar (37) and Yacine Brahimi (41) all but settled the match by the halftime interval.Porto continued to improve its amazing perfect record at Estadio do Dragao in 2015, winning for the 19th time in 19 matches over all competitions, by a combined goal difference of 51-4.Maccabi can at least console itself in the knowledge that it joined a list that includes the likes of Bayern Munich and Chelsea, which also suffered defeats at the Dragao.The three-time reigning Israeli champion still has three more matches to play, but has every reason to be worried about joining the 2009/10 Maccabi Haifa as the only sides in the history of the competition to end the group stage without picking up a point or scoring a goal.Maccabi is the fifth Israeli side to reach the Champions League group stage, with Maccabi Haifa (2009/10), Hapoel Tel Aviv (2010/11) and Maccabi in 2004/05, as well as this season, all losing their first three games.Only the 2002/03 Maccabi Haifa collected points in any of the first three contests.Maccabi’s next chance to get off the mark in Group G will also be against Porto at Haifa Stadium in two weeks.Three weeks later, Tel Aviv hosts Chelsea before ending its campaign in Kiev on December 9.After barely threatening Chelsea’s and Kiev’s goals in the first two matches, Maccabi was determined to finally find the back of the net against Porto and it wasn’t far from doing so in the first 20 minutes.Eran Zahavi reached the team’s first chance after 13 minutes, firing high from the edge of the box.Tal Ben-Haim surged between two Porto players and into the box three minutes later, but his decision to try and skip by another player rather than shoot resulted in him losing the ball.All in all, Maccabi registered four shots off target in the first 20 minutes, but it would be Porto which would make its chances count.The breakthrough arrived in the 37th minute, with Aboubakar of Cameroon losing his marker and heading in from close range.It took just four minutes for the hosts to double their advantage. Five Maccabi players surrounded Aboubakar, but he still managed to release an accurate ball for Brahimi, who made no mistake with only goalkeeper Predrag Rajkovic to beat.Maccabi almost conceded a third from Tal Ben-Haim, but the defender was fortunate to see his attempted clearance blast off the post.The Israelis continued to search for a goal for the remainder of the match, but Porto ‘keeper Iker Casillas was only tested once in the 87th minute, and the yellow-and-blue ended yet another Champions League match with what is becoming a familiar feeling of frustration.