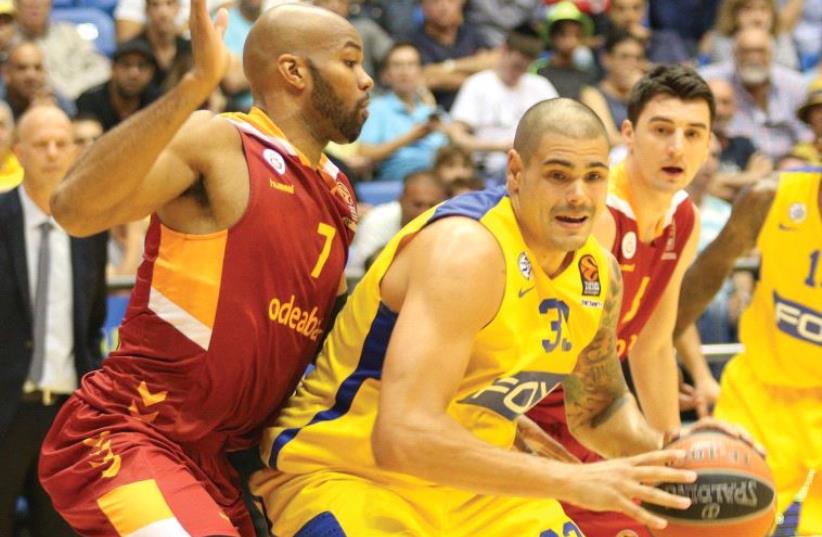 Maccabi Tel Aviv center Maik Zirbes (right) is still getting used to life at the club, averaging 9.3 points and 3.3 rebounds entering tonight’s game against Barcelona at Yad Eliyahu Arena.
(photo credit: ADI AVISHAI)
Advertisement
After winning his first three games at the helm, new Maccabi Tel Aviv coach Rami Hadar faces his toughest challenge to date when Barcelona visits Yad Eliyahu Arena on Wednesday night.Maccabi’s victories over Galatasaray and at Zalgiris Kaunas last week following the sacking of Erez Edelstein saw the yellowand- blue move to 2-2 in the Euroleague.The team continued to pick up confidence with Monday’s comfortable conquest of Hapoel Tel Aviv in the derby.Wednesday’s showdown will be a clash of contrasting styles. Maccabi is averaging 91.0 points per game, the second-highest in the competition, but has allowed an average 88.5 points in its first four contests, the third-most in the league.Barcelona is allowing the fewest points (70.5), but that is offset by its standing as the league’s lowest-scoring team (71.0), resulting in a 2-2 record to date.Barca will have to manage again without scorers Juan Carlos Navarro and Justin Doellman and has lost Pau Ribas for the season.Former Maccabi star Tyrese Rice leads Barca’s fit players in scoring (12.8 ppg), followed by Ante Tomic (11.0).Barcelona edged Bamberg 78-74 last Friday, with Rice, who helped Maccabi to the Euroleague title in 2014, leading the way with 18 points and six assists.“We needed this game. I think it was a must-win. To go down 1-3 in this competition would be tough, cause a lot of teams are playing really good now,” said Rice. “To get that second win with everything going on was big for our team.”While Maccabi is first and foremost focused on winning on Wednesday, it would much prefer to do so with a significant contribution by its Israeli players.Sylven Landesberg is still out injured, with Guy Pnini, Gal Mekel and Yogev Ohayon so far scoring a combined 22 points in the team’s first four Euroleague games.“It was nice to play, which is something that hadn’t happened much over recent weeks,” admitted Mekel after contributing 11 points and nine assists in the derby win, with Pnini finishing with 21 points.“The past two weeks have been difficult for everyone. We love and respect Erez Edelstein and it is a shame things ended this way. I love Rami as a person and he is the type of man you want to fight for. Like every other player, I want to play as much as possible and it is my job to prove I deserve to be on court.”On TV: Euroleague basketball: Maccabi Tel Aviv vs Barcelona (live on Sport 5 at 7:30 p.m.)