Jerusalem was playing without Amar’e Stoudemire, who was being rested ahead of the best-of-three series against Gran Canaria of Spain, and was also missing injured Israeli guard Bar Timor. 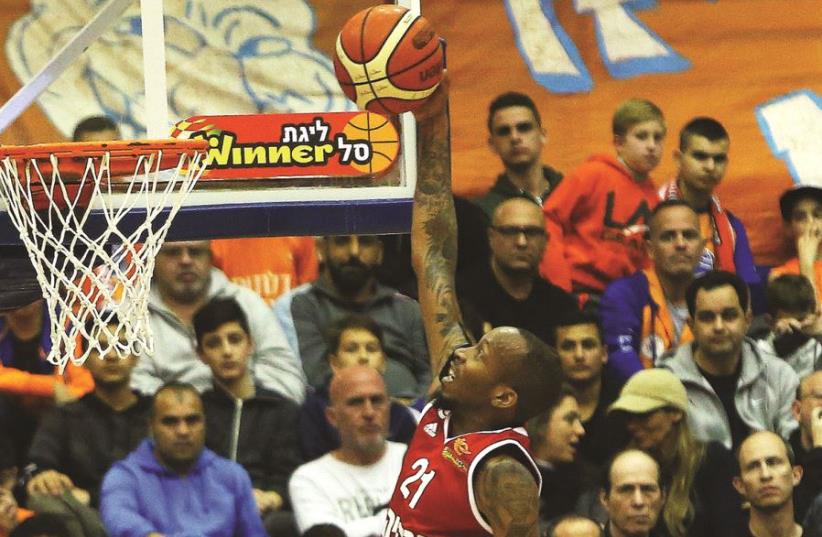 Hapoel Jerusalem’s Jerome Dyson
(photo credit: UDI ZITIAT)
Advertisement
Hapoel Jerusalem picked up some much-needed confidence on Saturday ahead of the Eurocup quarterfinals, bouncing back from squandering a 23-point lead to beat Maccabi Rishon Lezion 82-68 in BSL action.Jerusalem was playing without Amar’e Stoudemire, who was being rested ahead of the best-of-three series against Gran Canaria of Spain, and was also missing injured Israeli guard Bar Timor.Hapoel entered the contest on the back of a four-game losing streak over all competitions, scoring a season-low in points in a 62-55 BSL defeat at Hapoel Eilat on Wednesday.It nevertheless steamrolled Rishon in the first half, taking a 40-21 lead into the break.The hosts surged back in the third quarter and completed the comeback early in the fourth frame, taking a 57-56 lead following a Shawn Dawson basket.But Jerusalem maintained its cool to regain control, improving to 12-9 in the BSL ahead of Game 1 against Gran Canaria in Jerusalem on Tuesday. Game 2 will be played in Spain on Friday, with Game 3, if necessary, to take place in the Israeli capital the following Wednesday.Jerome Dyson led Jerusalem with 22 points on Saturday, with Travis Peterson and Curtis Jerrells scoring 17 points each.Dawson and Javon McCrea had 14 points each for Rishon, which fell to 10-10.Jerusalem came out with guns blazing, hitting five three-pointers in the first quarter alone, three of them by Peterson, to open a 17-point lead (27-10) after 10 minutes.The margin reached 20 points (32-12) after another Jerrells triple two minutes into the second period and the visitors seemed to be cruising at the break, holding a 19-point cushion (40-21) But nothing has been straightforward for Hapoel over recent weeks and Rishon got back into the game with a 13-0 run (44-34).The hosts closed to within just seven points (56-49) entering the final 10 minutes and the Maccabi Arena was rocking when Dawson’s lay-up completed a 12-0 surge which gave Rishon its first lead of the night (57-56) with under 8:30 minutes to play.But Jerrells would calm Hapoel’s nerves with two more threes, giving the visitors a lead they wouldn’t relinquish.On Sunday, Hapoel Holon aims to get back on track when it hosts Hapoel Tel Aviv. Holon was brimming with confidence after winning four straight BSL games to take control of second place in the standings.However, season-ending knee surgery to star guard Khalif Wyatt and a less serious knee injury to Dagan Yivzori derailed the team, which lost to Jerusalem in the State Cup semifinals before falling to Hapoel Eilat in BSL action last week.Elsewhere Sunday, Hapoel Gilboa/Galil hosts Maccabi Kiryat Gat. On Monday, Maccabi Tel Aviv hosts Maccabi Haifa, Hapoel Eilat goes for its seventh straight win when it visits Maccabi Ashdod and Bnei Herzliya welcomes Ironi Nahariya.