Ness Ziona would have stayed up with a win as Maccabi Kiryat Gat suffered an 85-82 overtime loss to Maccabi Rishon Lezion. 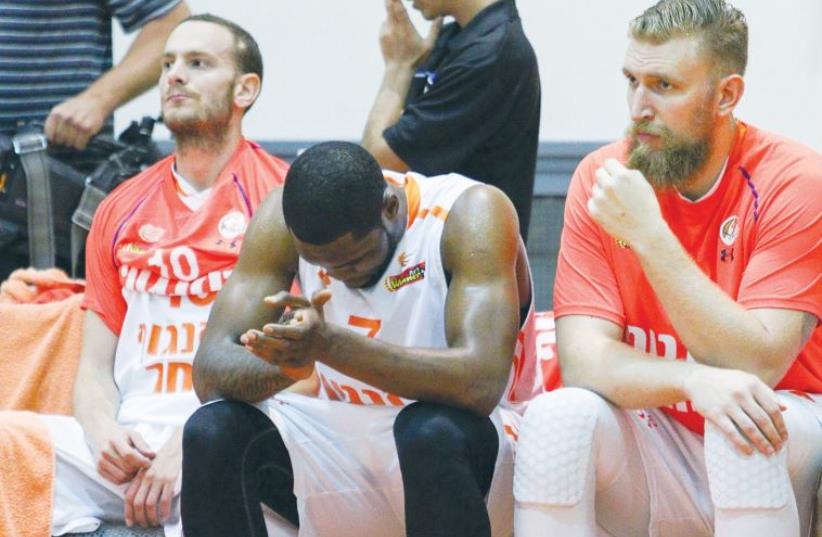 Ironi Ness Ziona players (from left) Yuval Naimi, Ivan Aska and Igor Nesterenko
(photo credit: DANNY MARON)
Advertisement
Ironi Ness Ziona’s three-year run in the BSL ended on Sunday night after it was relegated to the National League. Ness Ziona dropped to a 10-23 record with its fifth straight loss, ending the regular season in last place following a 95-84 defeat to defending champion Hapoel Jerusalem.Ness Ziona would have stayed up with a win as Maccabi Kiryat Gat suffered an 85-82 overtime loss to Maccabi Rishon Lezion.However, it was always going to struggle against Jerusalem and will have to rebuild in the second division after making the playoffs in its first two seasons in the top flight.Jerusalem had little to play for after clinching the top seed in the playoffs weeks ago. However, it still improved to 27-6 with its 12th straight league victory, just one shy of the club record.Jerusalem already knew it would be facing No. 8 seed Hapoel Tel Aviv in their best-of-five quarterfinal series, which gets underway in Jerusalem on Thursday.Eli Holman had 18 points and 11 rebounds for Jerusalem, which seized control with a 13-2 run to end the first half, opening a 15-point gap (53-38) it easily maintained.Fuquan Edwin led Ness Ziona with 21 points.“This is a very difficult moment for me,” said Ness Ziona forward Tal Dan, who had 15 points and 13 rebounds on Sunday and played for the team in all three of its seasons in the BSL. “I feel so bad for the fans. We let them down and I can only apologize.”The three remaining matchups in the playoffs were also decided on Sunday. Maccabi Tel Aviv (24-9), Maccabi Haifa (19-14) and Ironi Nahariya (18- 15) had all previously secured home-court advantage in the quarters, but only discovered on Sunday who they will face starting from Thursday.Surprise-package Nahariya will play last year’s finalist Hapoel Eilat (17-16), which secured fifth place with an 88-83 victory over Bnei Herzliya (15-18). Khalif Wyatt netted 23 points for Eilat, with Drew Crawford scoring 23 for Herzliya.Herzliya dropped to seventh and will face Maccabi Tel Aviv in the quarters, with Rishon’s win over Kiryat Gat moving it up to sixth place, setting up a series against Haifa.Mark Lyons scored 24 points for Rishon (16-17), including three consecutive triples in overtime, with Paul Delaney finishing with 21 points for the losers.Also Sunday, Maccabi Tel Aviv won for the eighth time in nine games, defeating Hapoel Holon 92-82 on the road. Sylven Landesberg led six Maccabi players in double figures with 17 points, while Will Clyburn ended his excellent season for Holon with 25 points and 11 rebounds.After securing its survival last week, Maccabi Ashdod (14-19) ended its campaign with a 90-87 win over Nahariya. Charles Thomas had 15 points for Ashdod, with Michael Umeh scoring 23 points for Nahariya, which is aiming to return to the Final Four for the first time since 2008.