With Mac TA in action on Sunday, Southerners can climb back into first place by beating Sakhnin. 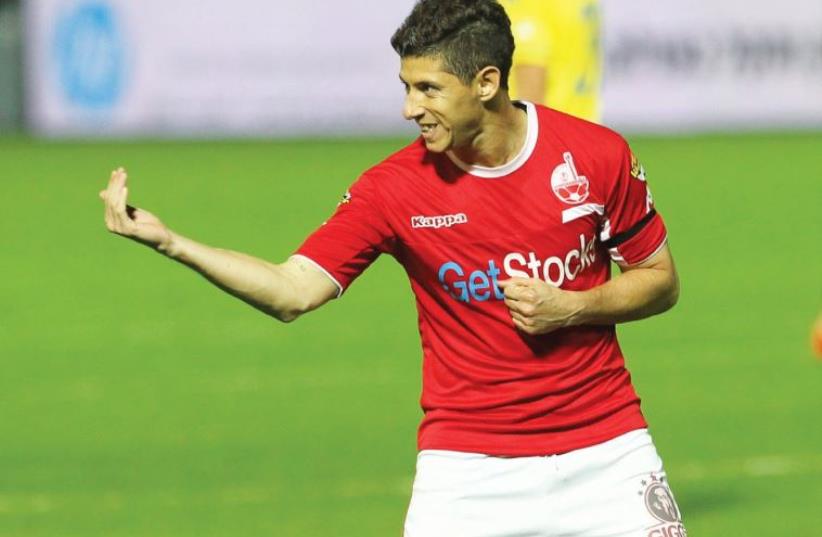 Hapoel Beersheba midfielder Maor Melikson celebrates after scoring his team’s second goal in last night’s 2-1 win over Maccabi Tel Aviv at Bloomfield Stadium
(photo credit: DANNY MARON)
Advertisement
Hapoel Beersheba is doing its best to portray things as business as usual, but with its Premier League title challenge in danger of coming apart at the seams, pressure levels at the club are at an alltime high.For the first time since December, Beersheba enters a weekend trailing Maccabi Tel Aviv in the standings, after surrendering first place.After only managing a 1-1 stalemate with Maccabi Haifa last Saturday, its fourth draw in the past five matches, Beersheba was leapfrogged by the threetime defending champion on Monday.Eran Zahavi’s 90th-minute winner gave Maccabi a dramatic 3-2 victory over Beitar Jerusalem to move the yellow-andblue one point in front of its title rival.Beersheba still hasn’t lost a match since September, an unbeaten streak of 25 games, but its failure to pick up all three points at home has cost it dearly, with all four of its recent draws coming at Turner Stadium.Beersheba visits Bnei Sakhnin in Netanya on Saturday, a month after the teams drew 2-2 at Turner. A victory will send Beersheba back up to first place for at least 24 hours, with Maccabi not visiting Maccabi Haifa until Sunday.While it has struggled to win at home, Beersheba has triumphed in five straight road games dating back to the beginning of January. It defeated Sakhnin 1-0 at Doha Stadium last December, but Saturday’s match will be held in Netanya after Sakhnin was punished for the unruly behavior of its supporters.“Obviously it is disappointing to drop to second place, but even when we led by five points and everyone was already crowning us I said it isn’t over yet,” said Beersheba coach Barak Bachar. “We will have to lift ourselves and focus on our upcoming match.“Sakhnin is in fantastic form. We need to do our job and focus on ourselves.Momentum can change with every match. People said we were the favorites after beating Beitar and now after drawing we are no longer the favorites. If we beat Sakhnin that will give us some momentum.”Sakhnin beat Hapoel Ra’anana 3-2 last week to open a three-point gap in fourth place and has lost only once in its past 11 matches, against Maccabi Tel Aviv at Bloomfield.Maccabi Tel Aviv has won seven of eight games to climb up to first place, with Eran Zahavi’s winner against Beitar taking his tally for the season to a record 31 goals, one more than Nissim Elmalich managed in the 1954/55 campaign.Zahavi has scored by himself more goals than half of the league’s teams, finding the back of the net on more occasions than Maccabi Netanya and Hapoel Kfar Saba have done combined.Kfar Saba hasn’t scored in its past four matches and could find itself in the relegation zone should it fail to defeat Maccabi Petah Tikva on Saturday.Kfar Saba sits just one point above 13th place currently occupied by Hapoel Haifa, which won for the first time in 11 contests last weekend and will be confident of making it two straight victories by overcoming the already-relegated Maccabi Netanya on Saturday.Ironi Kiryat Shmona, which is two points above the danger zone, hosts Hapoel Tel Aviv, which has won three consecutive matches to all but secure its survival.With only four matches each to play, the battle against demotion is looking like a four-team fight, with Hapoel Acre (32), Kiryat Shmona (31), Kfar Saba (30) and Hapoel Haifa (29) separated by a mere three points.Acre visits Bnei Yehuda on Sunday.On Monday, Beitar Jerusalem, which has lost three straight matches, hosts Ra’anana.