The teams are looking to triumph in the first of the four ties they will need to come through to reach the group stage. 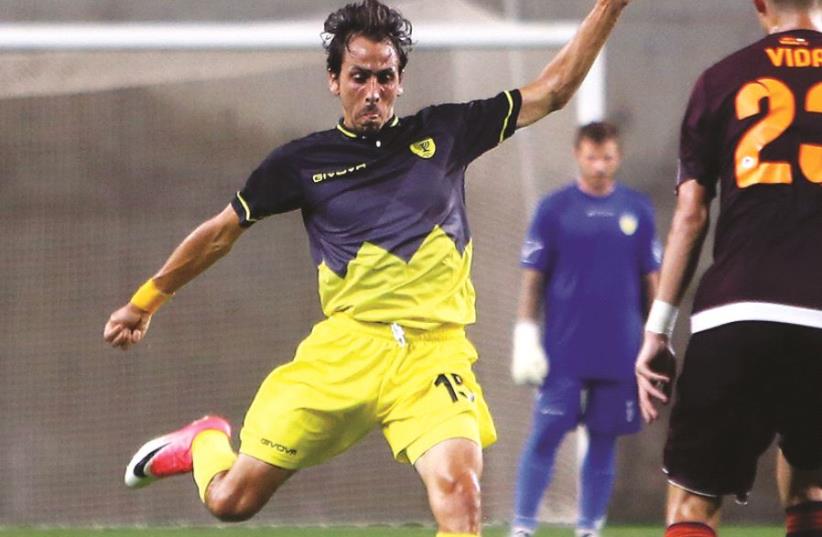 Beitar Jerusalem midfielder Yossi Benayoun.
(photo credit: UDI ZITIAT)
Advertisement
Beitar Jerusalem and Maccabi Tel Aviv are confident of securing their places in the Europa League second qualifying round on Thursday, looking to triumph in the first of the four ties they will need to come through to reach the group stage.Three goals in five minutes, including two in stoppage time, gave Beitar Jerusalem a dramatic 4-3 win over Vasas of Hungary in the first leg last week, but still left Sharon Mimer’s team with plenty of work to do.A 1-0 victory is all Vasas needs to knock Beitar out on Thursday.Vasas was leading 3-1 in the 88th minute of the first leg before Beitar registered a remarkable comeback, sparked by debutant Yossi Benayoun.After coming on as a substitute in the 56th minute, the 37-year-old midfielder gave Beiter a lifeline by slotting in from close range two minutes from time. He then provided the assist for the equalizer three minutes later, with Idan Vered rounding the ‘keeper to level the score.Erik Sabo completed the comeback with one minute to play.“We registered an amazing comeback in the first leg, but we learned that we can’t underestimate any opponent,” said Benayoun. “We need to prove on the field that we want to win more than they do.”Maccabi Tel Aviv was also far from impressive in its first leg against KF Tirana of Albania. But the 2-0 win leaves it well placed to advance on Thursday.Goals from Yonatan Cohen (27) and Eli Dasa (64) ensured the yellow-andblue got 2017/18 and Jordi Cruyff’s head coaching career off to a winning start last week, but the new boss is taking nothing for granted.“I don’t think it’s correct to say that we came here already thinking that we have advanced, 2-0 is a good result but we know that nothing is finished,” said Cruyff on Wednesday.“Over the last few years our goal has been to advance to the group stages and it’s clear that this is something we also want to do now.”Veteran defender Tal Ben-Haim is expecting a difficult second leg against the Albanian second division side.“We will never play for a draw and we are expecting a tough contest,” said Ben-Haim. “Tirana has some good players and we have prepared for this match and are planning on putting on a good performance. We believe in ourselves.”In other soccer news, Israeli coach Ran Ben-Shimon was named as the new coach of the Cyprus national team on Wednesday. Ben-Shimon, who coached Cypriot side AEK Larnaca in 2012/13, will leave his post at Ashdod SC.On TV: Europa League qualification second leg: KF Tirana vs Maccabi Tel Aviv (Mac TA leads 2-0 from 1st leg) (live on Sport5 at 6 p.m.) Vasas Budapest vs Beitar Jerusalem (Beitar leads 4-3 from 1st leg) (live on Sport 1 at 9:30 p.m.)