Watch: Blatt and LeBron two games away from NBA championship

Cleveland never trailed in the game and led by as many as 20 points late in the third quarter to finish with a 96-91 victory. 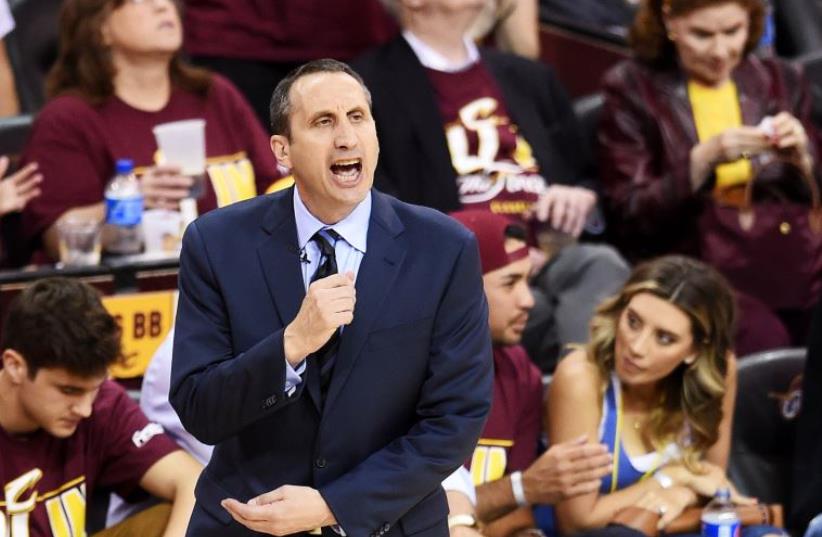 David Blatt of the Cleveland Cavaliers
(photo credit: JASON MILLER / GETTY IMAGES NORTH AMERICA / AFP)
Advertisement
CLEVELAND - LeBron James turned in another virtuoso playoff performance in leading the Cleveland Cavaliers to a thrilling 96-91 victory over the Golden State Warriors on Tuesday and a 2-1 lead in the best-of-seven NBA Finals.James had a game-high 40 points to go along with 12 rebounds and eight assists in front of a raucous crowd of red T-shirt-clad fans, as Cleveland grabbed the upper hand in the championship series against the top-seeded Warriors."I didn't see (James) take bad shots at all. I thought he was great," Cleveland head coach David Blatt said of James, who went 14-of-34 from the field.
LeBron James Goes Off for 40 in Game 3 Win
"I thought he controlled the game and helped his team to play the way that we wanted to play."Cleveland never trailed in the game and led by as many as 20 points late in the third quarter but were put to the test as Golden State clawed back within a point with under three minutes remaining.The league's reigning Most Valuable Player Stephen Curry had a horrible start to the game for Golden State but used a strong fourth quarter to finish with a team-high 27 points.But Curry made a costly error with two minutes to play and his team down by four points when he sent a behind-the-back pass out of bounds with no team mate in sight.On Cleveland's ensuing possession, James drained a three-pointer that put the Cavaliers ahead 87-80 and brought the delirious towel-waving crowd to their feet.Golden State, with Curry finally finding a groove, looked ready to take a stab at tying the game when they were awarded the ball with 17 seconds to play only to have game officials reverse a call and give Cleveland the ball.From there, James drained a pair of free throws to put the game out of reach."I didn't like our body language for much of that first three quarters," said Warriors head coach Steve Kerr. "This is what we have to fight through. Things aren't going our way, it doesn't matter, you've got to fight through."The Cavs, who were already heavy underdogs before losing All-Star guard Kyrie Irving to a knee injury in the opener, are suddenly two wins away from a maiden NBA title and ending the city's 51-year drought in major sports championships.