The 28-year-old Israeli arrived in New Orleans with high hopes after leaving Sacramento last Sunday as part of the DeMarcus Cousins trade. 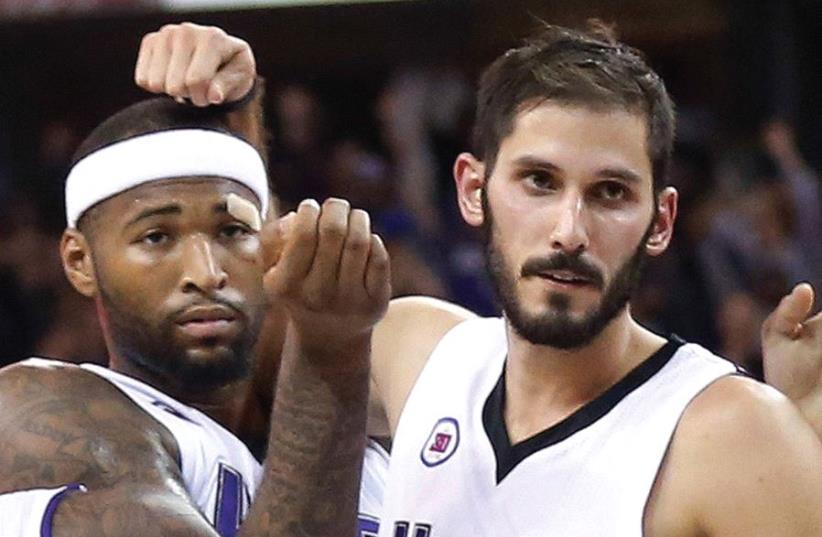 ISRAELI FORWARD Omri Casspi (right) was packaged with his All-Star teammate from the Sacramento Kings, DeMarcus Cousins (left), in a trade to the New Orleans Pelicans yesterday. The Pelicans will mark the fourth NBA club (with two Sacramento stops) for the 28-year-old Casspi in his eight years in th
(photo credit: REUTERS)
Advertisement
Omri Casspi’s nightmare season reached a new low on Saturday when he was waived by the New Orleans Pelicans, just six days after joining the team and two days after breaking his right thumb during his debut.The 28-year-old Israeli arrived in New Orleans with high hopes after leaving Sacramento last Sunday as part of the DeMarcus Cousins trade.The forward looked to have quickly settled at his new team after scoring 12 points in just under 24 minutes during Thursday’s loss to Houston. However, what seemed like an innocuous blow to his right hand during the third quarter while he was guarding Eric Gordon of the Rockets proved to be far more significant than initially thought.X-rays showed he suffered a broken thumb, meaning he will be out of action for between 4-to-6 weeks.“I looked at my thumb and it just swelled up real fast,” Casspi said. “I kept playing and then we just figured let’s do an X-ray just to make sure there’s nothing there, but it turned out, it is what it is.”With the short-handed Pelicans desperate for healthy bodies, they opted to release Casspi and signed Reggie Williams to a 10-day deal to replace him.“I think he understands,” Pelicans coach Alvin Gentry said Saturday. “We talked about it.It’s just kind of an unfortunate situation because I felt like he was going to be a guy that could help us – the shooting aspect, the size and everything. These kinds of things happen. At this stage, it was really just important for us to have that roster spot.”“It’s unfortunate,” Cousins said. “My guy can’t catch a break.”Casspi, who was anyway set to be a free agent at the end of this season, will hope he can find another NBA team before the April 14 deadline by which playoff bound teams need to set their rosters.Casspi has struggled with injuries throughout this season, averaging 5.9 points and 4.1 rebounds in just 22 games for Sacramento.Even when healthy, he disappeared from the rotation for stretches earlier this season after falling out of favor with Kings coach Dave Joerger.Casspi had kick-started his faltering NBA career in Sacramento, rejoining the Kings in the summer of 2014 after being traded away by Houston and waived by the Pelicans.He hadn’t played since January 13 due to a calf injury and was excited ahead of the renewed opportunity he was set to be handed in New Orleans.However, once more he never got a chance to prove himself with the Pelicans, with his latest run of bad luck likely to cost him millions of dollars in his next NBA deal, assuming he finds one.