Yellow-and-blue again in over its head against Mourinho’s men, falls to 5th straight group defeat. 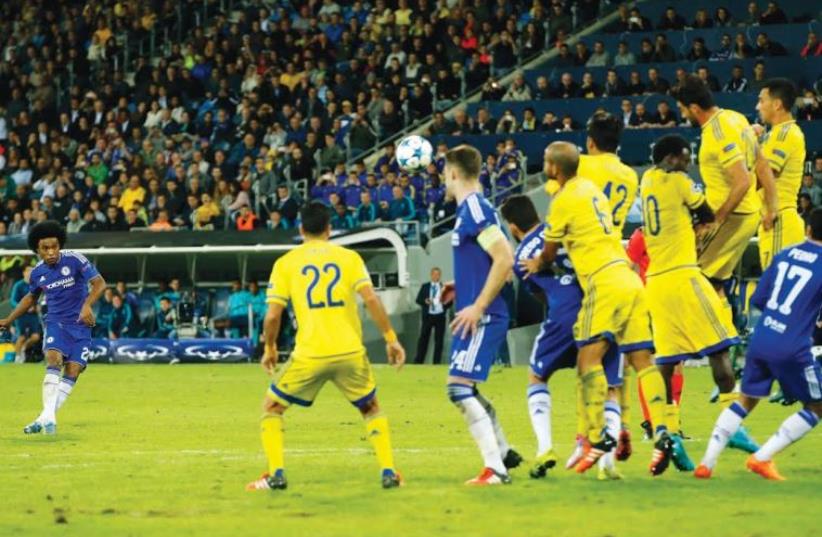 CHELSEA MIDFIELDER Willian (left) sends the ball soaring over the line on a free kick for the Blues’ second goal in their 4-0 Champions League victory over Maccabi Tel Aviv last night at Sammy Ofer Stadium in Haifa.
(photo credit: REUTERS)
Advertisement
Maccabi Tel Aviv was left once more to rue what might have been on Tuesday night, suffering a 4-0 defeat to Chelsea in Champions League action at Haifa Stadium for its fifth loss in five matches.The three-time reigning Israeli champion got off to an encouraging start just as it did in its previous match against Porto and also had chances to equalize despite dropping to 10 men following Tal Ben- Haim’s sending off for a reckless foul in the 40th minute.However, the yellow-and-blue remained with just a single goal to its name from five matches, with its overall goal difference falling to 1-15, after failing to convert its chances and being punished at the other end by a far more clinical opponent.Gary Cahill gave the English champion the lead after 20 minutes, tucking the ball in from close range after Maccabi goalkeeper Predrag Rajkovic did well to save the defender’s initial header. The young Serbian stopper displayed the best game of his short career in Israel, denying Chelsea’s players on several occasions.However, there was nothing he could do against Willian’s free kick in the 73rd minute and Oscar (77) and Kurt Zouma (91) piled the misery on the yellow-and-blue, which was also beaten 4-0 by Chelsea at Stamford Bridge.Maccabi’s final chance to pick up a point will be in three weeks when it ends its campaign at Dynamo Kiev.Other than scoring a goal, the first 10 minutes couldn’t have gone any better for Maccabi. The hosts registered their first chance after less than two minutes, with Tal Ben-Haim crossing the ball from the right and Dor Peretz sending his header high despite finding himself with plenty of space five meters out of the Chelsea goal.It took Tel Aviv less than three minutes to threaten Asmir Begovic’s goal once more, with Eli Dasa failing to find the target when he really should have done better from just inside the box.It was clear that it was only a matter time until Maccabi would cede control to the English champion and Chelsea punished the yellow-and-blue from a set piece in the 20th minute.Rajkovic did well to save Cahill’s initial header after Willian’s corner, but he could do nothing with the England defender first to the rebound.With an early lead, Chelsea was content on sitting back, but Maccabi couldn’t take advantage and its hopes of getting something from the game suffered a crushing blow with five minutes remaining in the half.Ben-Haim was shown a straight red card for kicking out at Chelsea striker Diego Costa, with the veteran Israeli defender immediately grabbing his head with his hands knowing what was coming from Spanish referee Alberto Undiano Mallenco.Nevertheless, Maccabi hit the ground running at the start of the second half and played Chelsea as equals despite having one man fewer.Dasa found himself with only Begovic to beat in the 50th minute, but he sent his shot straight at the ’keeper.Both teams came tantalizingly close to finding the back of the net in a frantic three-minute period starting from the 61st minute, with Eden Hazard first drawing a good save from Rajkovic. Tel Aviv’s young Serbian stopper had an even better save a minute later, somehow keeping out Cesar Azpilicueta’s effort from close range. Maccabi broke forward moments later, with Avi Rikan’s long ball finding Zahavi in space and the prolific midfielder’s superb shot only being kept out by an equally excellent Begovic save.That would prove to be the yellow-and-blue’s last chance to equalize.Willian’s accurate free kick doubled Chelsea’s advantage in the 73rd minute and Oscar’s goal four minutes later followed by Zouma’s stoppage-time header meant Maccabi ended yet another Champions League night in bitter disappointment.