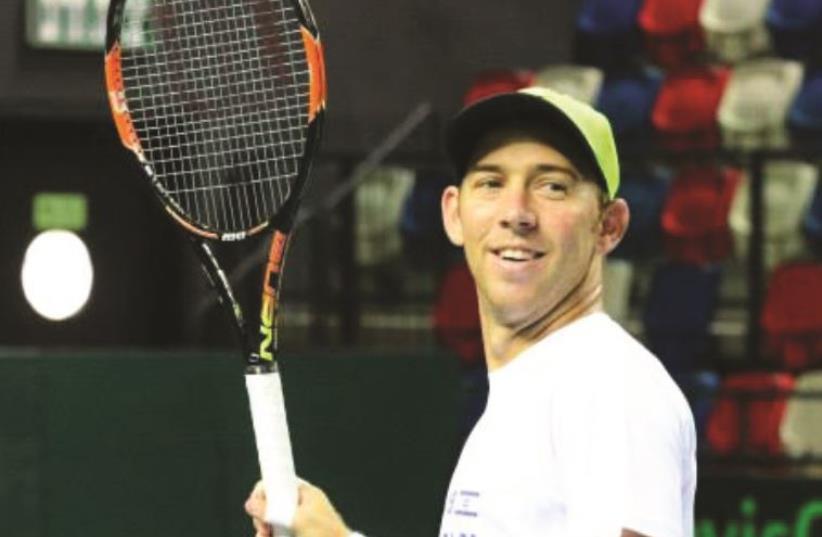 Dudi Sela
(photo credit: ISRAEL TENNIS ASSOCIATION)
Advertisement
Dudi Sela and Amir Weintraub will renew their rivalry at the Israel national tennis championships when they meet in the final at Ramat Hasharon on Friday.Sela and Weintraub clashed in the final five years in a row before the latter was forced to miss last year’s tournament due to injury. Sela, the No. 1 seed and world No. 100, beat Dekel Bar (859) 6-0, 6-3 in the semifinals on Thursday, which were moved to Haifa due to the rainy weather in Ramat Hasharon. Sela is looking to win his third straight national title and sixth in total.Weintraub (237) was only on court for a few minutes on Thursday, advancing to the final after the 37-year-old Noam Okun, who retired five years ago, pulled out while trailing 2-0 in the first set.Weintraub is targeting his third national title, but a first since 2012.Sela and Weintraub will team up later in the day to play in the doubles final against Yoni Erlich and Andy Ram, who came out of retirement for a week to play with his former partner.Julia Glushko, the women’s No. 1 seed and world No.126, encountered more trouble than expected against Shelly Krolitzky (1,202) in Thursday’s semis, but bounced back from dropping the second set on her way to a 6-0, 5-7, 6-2 victory.With Shahar Pe’er skipping the tournament to train in the US ahead of the new season, Glushko will be a massive favorite to lift her fourth title in the past five years on Friday when she faces 17-year-old Olga Fridman (276), who still officially represents Ukraine but is in the process of acquiring Israeli citizenship. Fridman defeated Deniz Khazaniuk (298) 6-4, 6-4 in the semis on Thursday.In the women’s doubles final postponed from Thursday, the Glushko sisters, Julia and younger sibling Lena, will come up against Alona Pushkarevsky and Yael Beckman.