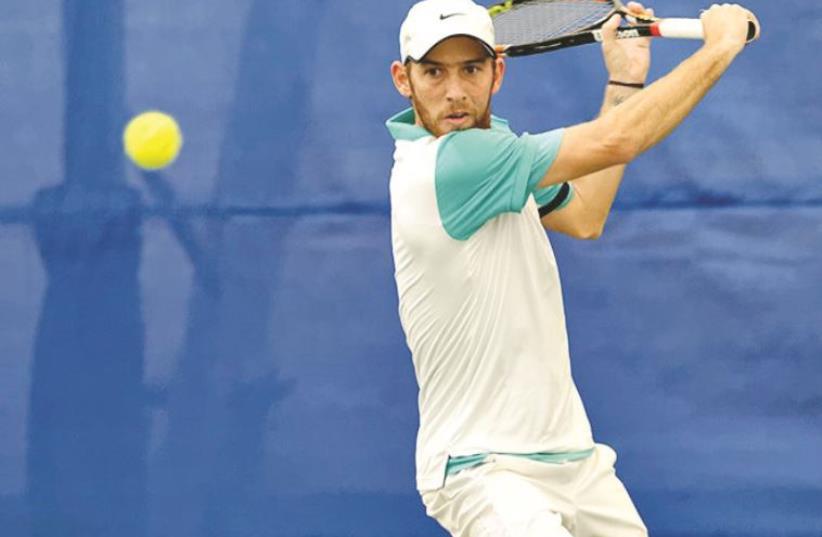 Dudi Sela
(photo credit: NIR KEIDAR/ISRAEL TENNIS ASSOCIATION)
Advertisement
Dudi Sela’s hopes of beginning the new year with a title were dashed on Sunday by one of tennis’s rising stars in Happy Valley, Australia.The 30-year-old Israeli, ranked No. 100 in the world, was targeting his 20th career title on the ATP Challenger Tour, but came up short against 18-year-old American Taylor Fritz, losing in the final 7-6(7), 6-2 in one hour and 18 minutes.Fritz, who will improve on his current career-high ranking of No. 174, began last year at No. 1151. He won the US Open Junior title last summer before also claiming two titles on the Challenger tour. Sela also lost to Fritz last year in the qualifiers for the Indian Wells Masters event.Despite the defeat, Sela is set to climb to No. 87 in the world on Monday. He will participate in the Canberra Challenger event this week, where he will face No. 2 seed, Santiago Giraldo (70), in the first round.Sela is the only Israeli guaranteed a place in a singles main draw at the Australian Open, which gets under way next week. Julia Glushko, Shahar Pe’er and Amir Weintraub will all aim to advance to the main draw via the qualifiers, which begin later this week.Meanwhile, an inspired Milos Raonic toppled Roger Federer 6-4, 6-4 to win the Brisbane International on Sunday and avenge his defeat to the Swiss master in last year’s final.Raonic unleashed his usual serving blitz, but it was the rangy Canadian’s groundstrokes that impressed the most as he outwitted the Swiss with a masterful display from the baseline.Closing out the match with a booming first serve that Federer could only parry long, Raonic roared in triumph, having beaten the 17-time Grand