Eilat standing in the way of Rishon back-to-back dream 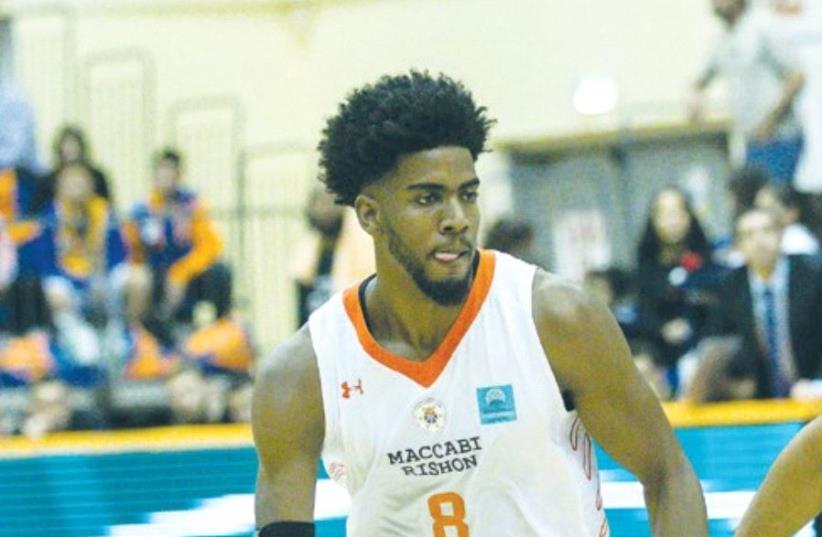 Maccabi Rishon Lezion guard Shawn Dawson will be looking to build on his breakthrough in last season’s post-season when the 2017 BSL playoffs begin on Sunday.
(photo credit: ODED KARNI/MACCABI RISHON LEZION)
Advertisement
After being in danger of having its BSL title defense cut short even before the playoffs began, Maccabi Rishon Lezion enters Game 1 of its quarterfinal series against Hapoel Eilat on Sunday with nothing to lose.Six wins from its final eight regular season games saw Rishon finish in seventh place, setting up a meeting with Eilat, which dropped to second after losing its last two games.Rishon was only the No. 6 seed in last year’s playoffs, but overcame Maccabi Haifa in the quarters before stunning Maccabi Tel Aviv and Hapoel Jerusalem in the Final Four.Only four players on Rishon’s roster were also part of last season’s triumphant team, with coach Arik Shivek being sacked 20 games into this season.Shivek was appointed last week as Maccabi Tel Aviv’s new coach.After four defeats in his first five games in charge, Shmulik Brenner, who was Shivek’s assistant before replacing him, has steadied the ship and is under no pressure against favorite Eilat.Eilat seemed set to end the regular season in first place after winning 15 of 17 games, including nine in a row. But a shock loss to Maccabi Kiryat Gat was followed by last Monday’s 80-78 defeat at Ironi Nahariya, allowing Hapoel Holon to leapfrog the southerners.Rishon also beat Eilat in two of three regular season meetings, although it was Eilat which won their last clash back in March.Game 2 will be played in Rishon next Sunday, with Game 3 to take place in Eilat on Thursday, June 1.The playoffs will continue on Monday when No. 1 seed Holon looks to build on its regular season momentum when it hosts Maccabi Haifa in their series opener.Holon won four of its final five games to climb up to first place.Also Monday, Maccabi Tel Aviv hosts Bnei Herzliya in Shivek’s first game in charge.Hapoel Jerusalem welcomes Ironi Nahariya on Tuesday.