Euro 2016 qualies: Belgium puts Israel out of its misery

The blue-and-white rarely broke out of its own half. 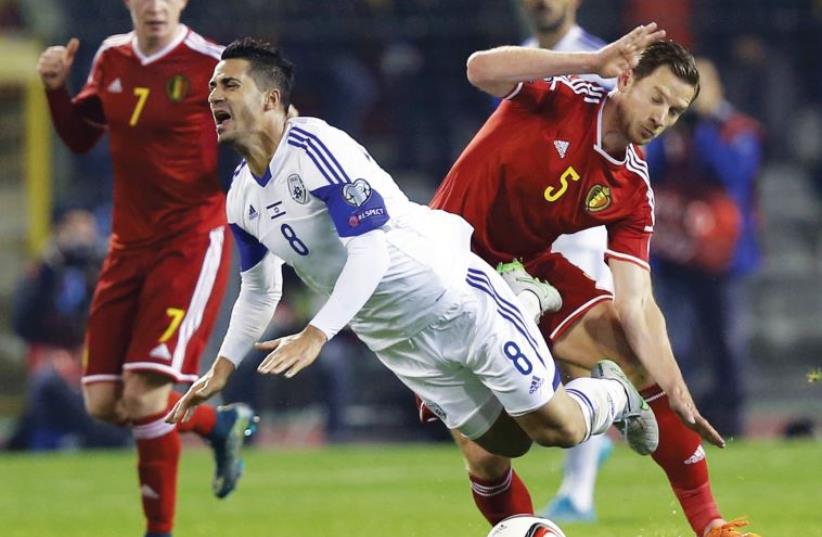 Israel midfielder Beram Kayal is tackled by Belgium’s Jan Vertonghen (right) during last night’s final Group B qualifying match in Brussels.
(photo credit: REUTERS)
Advertisement
Israel’s Euro 2016 qualifying campaign ended in an all-too-familiar feeling of frustration on Tuesday night, with the blue-and-white missing out on a place in the playoffs after suffering a 3-1 defeat to Belgium in Brussels.The national team had to beat the group leader in its final qualifier and hope that Bosnia-Herzegovina didn’t beat Cyprus in Nicosia in order to finish in third place.However, after keeping Belgium at bay for the first hour, Dries Mertens broke the deadlock in the 64th minute before Kevin De Bruyne clinched the win in the 78th minute, with Israel goalkeeper Ofir Martziano parrying the ball into his own net.Eden Hazard made it three in the 84th minute before Tomer Hemed netted a meaningless goal that was of little consolation at the end of such a miserable campaign.Even had Israel defeated Belgium it would have missed out on third place and a berth in the playoffs as Bosnia beat Cyprus 3-2. Haris Medunjanin gave Bosnia the lead in the 13th minute with a spectacular strike from 20 meters out, but Cyprus turned the match on its head with goals from Constantinos Charalambides (32) and Nestor Mytidis (41).However, Medunjanin, who played for Maccabi Tel Aviv between 2010 and 2012, leveled the score one minute from the interval and Milan Djuric scored the winner in the 67th minute.Israel still had its fate in its own hands entering Saturday’s match against Cyprus at Teddy Stadium. However, the shock 2-1 defeat in Jerusalem crushed the blue-and-white’s hopes, and following Tuesday’s results, Israel ended Group B in fourth place after picking up just four of a possible 21 points following its three consecutive wins to begin the campaign.Belgium, needing a win in order to rise to No. 1 in the FIFA rankings for the first time, put Israel under pressure from the start and registered its first attempt in the fourth minute, with De Bruyne firing high from the edge of the box.The blue-and-white rarely broke out of its own half, but it was centimeters away from taking a shock lead in the 21st minute. Tal Ben-Haim was fouled 20 meters from goal and Eran Zahavi’s shot was only denied by the post.That would prove to be Israel’s only real chance of the match, with Belgium’s Mertens registering one of the misses of the year in the 28th minute.De Bruyne squared the ball from the right, and after Israel ’keeper Martziano mistimed his lunge, Mertens somehow sent the ball wide from five meters out with an empty net in front of him.Belgium continued to dominate the possession for the remainder of the first half, but Martziano wasn’t called into action and the goalless deadlock wasn’t broken until the break.Belgium began the second half the same way it did the first, with Romelu Lukaku missing a golden opportunity after three minutes, rounding Martziano but failing to find the back of the net.Belgium took its foot off the gas after that, but Israel struggled to create scoring opportunities. The hosts had little to play for, but with a party planned following the match, they had no intention of souring the occasion with a humbling defeat.Any chance of that happening was dashed in the 64th minute, with Mertens making up for his earlier miss with a clinical finish in the box. Strikes from De Bruyne and Hazard secured the win before Hemed scored what he will likely remember as the saddest goal of his career.