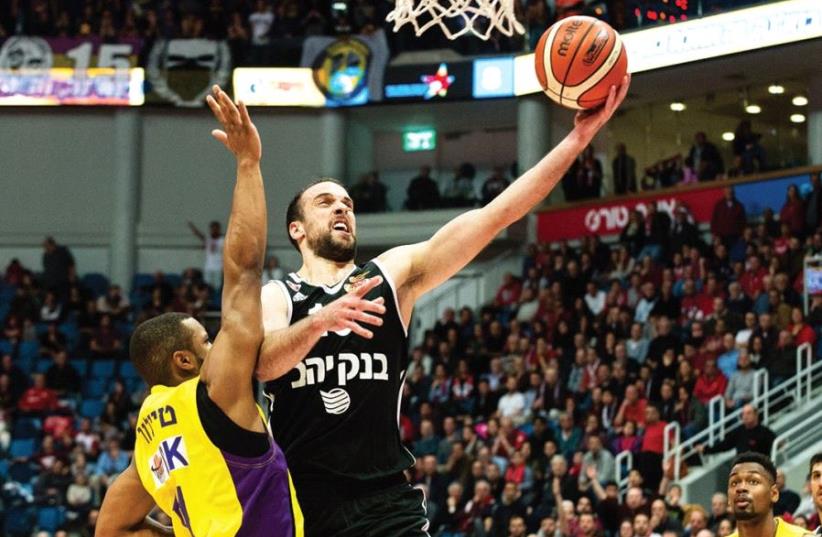 Israeli guard Yotam Halperin has been Hapoel Jerusalem’s top local player in the Eurocup Top 16 to date, averaging 6.0 points and 5.3 assists in just over 20 minutes per game.
(photo credit: DROR KEDMI)
Advertisement
Hapoel Jerusalem looks to continue building momentum in the Eurocup and officially secure its place in the quarterfinals when it hosts Lietuvos Rytas Vilnius of Lithuania at the Jerusalem Arena on Wednesday night.Jerusalem returned to first place in Top 16 Group G with an extremely impressive 97-81 victory over Zenit St. Petersburg last week to improve to 3-1.Jerusalem’s perfect start to the Top 16 was snapped with an emphatic 101-81 defeat in St.Petersburg the previous week.But Hapoel bounced back with a big win against a team that is considered to be one of the best in the competition and is in pole position to reach the last eight from first place.A win over Vilnius at home and over Nizhny Novgorod in Russia in its final group game next Wednesday will wrap up first place regardless of other results and give Hapoel a significant advantage in the playoffs.The top two from the group will advance to the quarterfinals, but winning the group could prove to be crucial as it ensures home-court advantage in the best-of-three quarterfinal playoff series. The record with which Jerusalem ends the Top 16 could also end up proving to be important, with home-court advantage in the best-of-three semifinal and final series’s to be decided by Top 16 records.Jerusalem, which can already secure first place on Wednesday should it defeat Rytas and Zenit lose against Nizhny, beat Vilnius 80-76 in Lithuania in their Top 16 opener. Hapoel came back from 20 points down, trailing 34-14 in the second quarter.It didn’t take its first lead of the night until the fourth frame, with star guard Curtis Jerrells scoring 20 of his 26 points after the break, including eight straight points at one stage in the fourth quarter and the go-ahead basket with less than three minutes to play.Jerrells has been nothing short of outstanding in Jerusalem’s victories in the Top 16, averaging 23.0 points and 4.6 assists. He was held to seven points in the team’s only loss. The American guard played in the Euroleague for five consecutive years until last season, but said he is loving life in Jerusalem and believes the team can go all the way in the Eurocup.“The night before the game against Zenit someone asked me if I don’t miss playing in the Euroleague,” said Jerrells. “But for me this is basketball. This is what I love to do. We are a team, a family, and sometimes that means more than anything else.“I would be lying if I said that we don’t want to win this title,” added Jerrells. “But we will not get there without the final two Top 16 games.”After opening the Top 16 with two straight losses, Rytas has bounced back with two emphatic victories over Nizhny, winning by 34 points in Russia and by 26 points in Lithuania last week.“We showed something extra against Zenit and we need to build on that,” said Jerusalem coach Simone Pianigiani, whose team will be playing for the fourth time in the past eight days.“These last two Top 16 games are like finals for us.”