Shivek: “There is no doubt that there are games during the season that prove to be turning points and this could be one of those.” 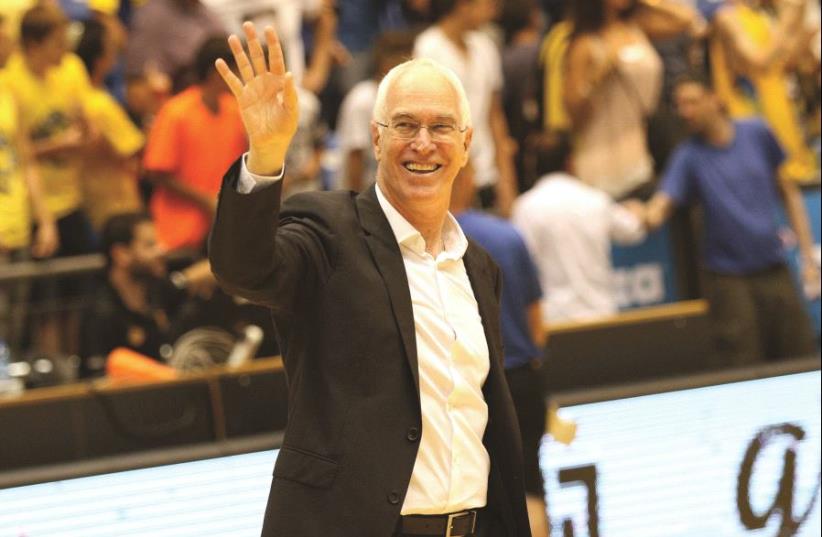 Arik Shivek seems to be enjoying every moment at Maccabi Tel Aviv despite knowing that he is unlikely to remain its head coach even should he guide the yellow-and-blue to the BSL title.
(photo credit: ADI AVISHAI)
Advertisement
The coaching changes at Hapoel Eilat and Bnei Herzliya continued to bear fruit on Monday night, with Sharon Drucker and Arik Shivek leading their respective teams to important victories as the battle for BSL playoff berths heats up.Eilat lost five of its first seven games before Drucker took charge, but since falling in its first contest under its new coach, has triumphed in eight of 12 encounters, registering its third win in a row by beating Maccabi Rishon Lezion 79-75 on Monday.In-form Israeli forward Amit Simhon netted the go-ahead basket with 36.4 seconds to play, completing a three-point play that gave Eilat a two-point lead (76-74) it wouldn’t relinquish.Simhon led five Eilat players in double figures with 18 points.Eilat improved to a 10-10 record and moved up to sixth place, while Rishon Lezion fell to 8-12.Drew Crawford scored 15 points for Rishon, which can’t wait for the arrival of new signing Keith Langford, last season’s top scorer in the Euroleague.The American guard, who played for Maccabi Tel Aviv in 2011/12, averaged 21.75 points per game for Unics Kazan in Euroleague action last season and joins Rishon after beginning this season at Shenzhen Leopards in China.Herzliya also lost its first game under Shivek, falling to a 2-9 record at the start of January.But since that setback against Maccabi Ashdod, Herzliya has won six of nine games, with its defeats coming against Maccabi Tel Aviv, Hapoel Holon and Eilat.Herzliya made it three straight wins on Monday by coming back from a 20-point deficit to defeat Maccabi Haifa 79-75.Shivek’s side was down by 15 points after scoring only six points in the first 10 minutes (21-6) and trailed 41-21 in the second period. But a comeback led by guard Brandon Triche saw it climb out of the big hole and clinch an important victory in the battle against relegation.Triche ended the night with 29 points, helping Herzliya improve to 8-12.Trevor Gaskins had 19 points for Haifa, which remained in last place after the heartbreaking loss saw it fall to 6-14.“I always believe in my team,” said Shivek. “There is no doubt that there are games during the season that prove to be turning points and this could be one of those.”Also Monday, Ironi Ness Ziona (8-12) defeated Ironi Nahariya (7-13) 96-88 behind 24 points and 13 rebounds from Talib Zanna.