“We are not looking at the standings at this stage of the season. Our goal is to continue and improve and if we do that the points will follow.” 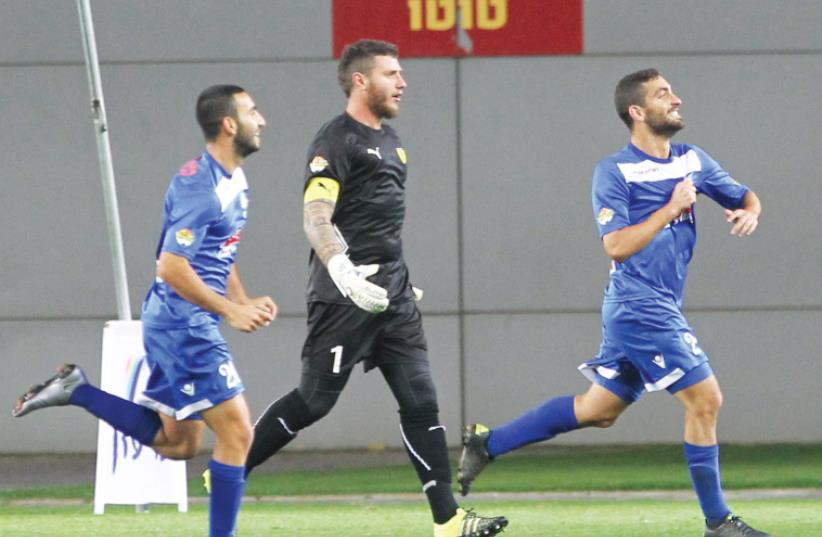 Maccabi Petah Tikva midfielder Gidi Kanyuk (right) celebrates after scoring past Beitar Jerusalem goalkeeper Boris Kleyman (center) during last night’s 2-0 win in the Toto Cup semifinal in Netanya.
(photo credit: DANNY MAARON)
Advertisement
Hapoel Tel aviv dropped to the bottom of the premier league standings on Monday night, remaining on a single point after three matches following a 2-0 defeat at Maccabi Petah Tikva.Giddy Kanyuk (35, 83) scored both goals for Petah Tikva, which joined leaders Hapoel Beersheba and Maccabi Tel Aviv on seven points.“We are not looking at the standings at this stage of the season,” said Petah Tikva coach Kobi Refua. “Our goal is to continue and improve and if we do that the points will follow.” Hapoel is the only team in the league yet to score a goal and coach Eli Gutman couldn’t hide his frustration.“I’m very disappointed,” said Gutman, who added he is considering changing the team’s tactics due to its offensive struggles. “We aren’t achieving our targets and that is disappointing. I don’t think anyone could have been so pessimistic and thought we would start the season like this.”Hapoel owner Amir Kabiri held a rare press conference with coach Eli Gutman on Sunday to speak about the club’s financial difficulties. “The overall responsibility is mine and I’m here to deal with it,” said Kabiri, revealing that the club’s deficit stands at NIS 45 million. “I made many mistakes and made some moves I’m not at peace with, but we will learn from this and correct our mistakes. The most pressing matter is the delay in the payment of salaries. Everyone at the club knows this can’t continue. The club will return to its old self despite the tough situation.”Gutman said he believes in the owner’s long-term vision. “When someone puts their faith in you to me that means more than if someone loves you,” explained Gutman. “The people here and the fans have put their faith in me. I will do everything so that this club will return to the top of Israeli soccer. Without Kabiri’s vision I wouldn’t have been here.”