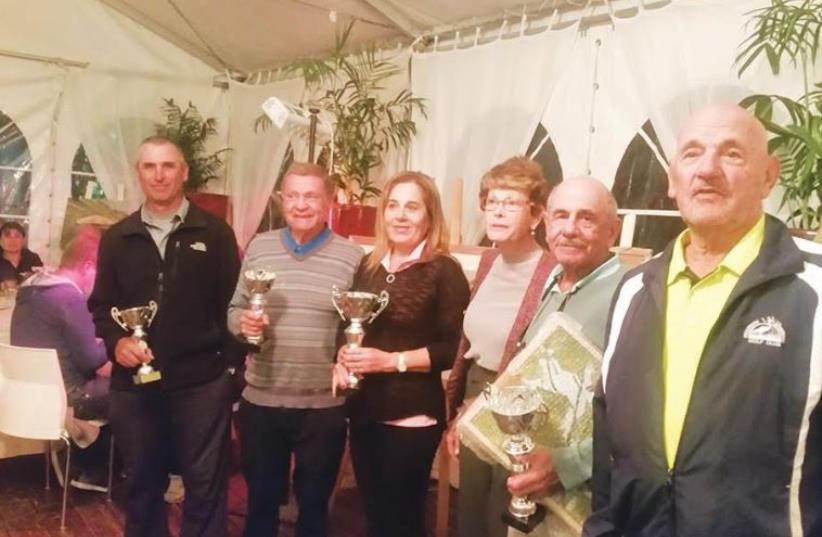 Ga’ash Golf tournament winners
(photo credit: Courtesy)
Advertisement
The Ga’ash Golf Club hosted a tournament this month in memory of the late Yeruham Shafat.Shafat will be remembered for his devotion to the Ga’ash Golf Club and to golf in Israel and was a member of the committee of the Israeli Golf Federation for many years.He was a devoted family man and a keen artist who also promoted the playing of chess for youth in his community.A full field of 68 golfers played tribute to Shafat by playing in an individual Stableford competition with shotgun start.The A Division consisted of players with a 0-15 handicap, and it was Dave Haskell who took first place, on 19 Stableford points, followed by Noam Shultz on 18 points.Yehudit Merdler and Solly Dreman both topped the B Division with 20, with Merdler taking first place on the countback.Nearest-to-the-pin prizes – sponsored by Greenfield at Ga’ash – went to Dani Seker.It was also a good day for Gill Sadeghi, who nailed a hole in one on the par-3 fourth hole, playing 109 meters. Playing in Sadeghi’s 4-ball group were her husband Jamshi, Dalia Sheni and Danny Bendel.At the moving award ceremony, club captain Avi Dagan and Shafat’s widow, Ruthi, presented the prizes.