Israeli swimmers hoping to shine at worlds in Russia

Israel sent 11 swimmers to the pool events in Kazan, which begin on Sunday. 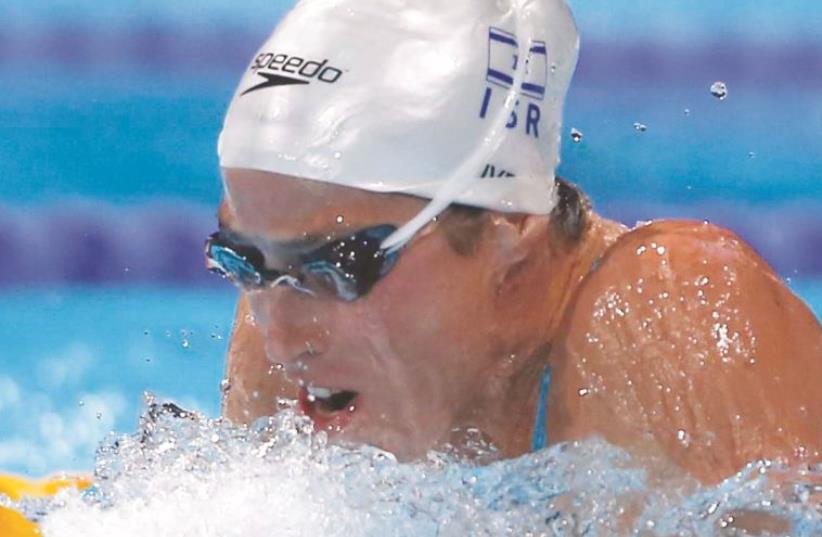 Israel’s Amit Ivry will begin her participation at the World swimming Championships in the first day of action in the pool in Kazan, Russia today, taking part in the 100m butterfly and 200m IM heats.
(photo credit: REUTERS)
Advertisement
After a disappointing showing in Barcelona two years ago, the Israel delegation to this summer’s world swimming championships is aiming for a much-improved display in Kazan, Russia.Israel sent 11 swimmers to the pool events in Kazan, which begin on Sunday.Amit Ivry, Yakov Toumarkin, Tomer Zamir, Ido Haber, Zohar Shikler, Ziv Kalontarov, David Gamburg, Guy Barnea, Jonatan Kopelev, Gal Nevo and Liran Konovalov will all be targeting personal bests, which they hope will also be fast enough to meet Olympic qualifying time standards.Ivry, Toumarkin, Nevo and Kalontarov have all already booked their place in Rio 2016.At the previous world championships in 2013, only Barnea and Kopolev made it through the heats, both reaching the non-Olympic 50-meter backstroke final.“We have been preparing for this all year,” said Toumarkin. “It is true that I’m not under that much pressure as I have already booked my place in Rio, but I’m still expecting a lot from myself.”The absence of a handful of the world’s best swimmers, including Michael Phelps, has added an air of uncertainty to the 16th world aquatic championships.The championships were meant to be a full dress rehearsal for next year’s Olympics in Rio but a spate of high-profile withdrawals has diluted the competition.The highest-profile no-show is Phelps, who came out of retirement in 2014 but was subsequently banned from representing the United States at the world championships after being convicted of drink driving late last year.Australia’s James Magnussen, who won the 100 meters freestyle gold at the last two world championships, will also be missing after electing to undergo shoulder surgery, giving up his chance to become the first man to win the blue-ribbon sprint three times in row.France’s Yannick Agnel, the reigning world and Olympic champion in the 200m freestyle, is also skipping the world championships, because of a lung infection.The spotlight for the men’s events in Kazan is now likely to fall on South Africa’s Chad le Clos and China’s Sun Yang.One of the few men to have beaten Phelps at the Olympics, Le Clos will defend the 100m and 200m butterfly titles he won at the 2013 world championships in Barcelona and is also targeting the 50m, hoping to complete a unique treble.Sun is targeting the 200m, 400m, 800m and 1,500m individual freestyle events, plus relays, a feat no other swimmer has achieved.American Katie Ledecky is also trying to win the same four freestyle events in Kazan.The 18-year-old has been smashing world records at will for the last year and seems a sure bet to win the three longer races, but the 200m is her toughest challenge.Reuters contributed to this report