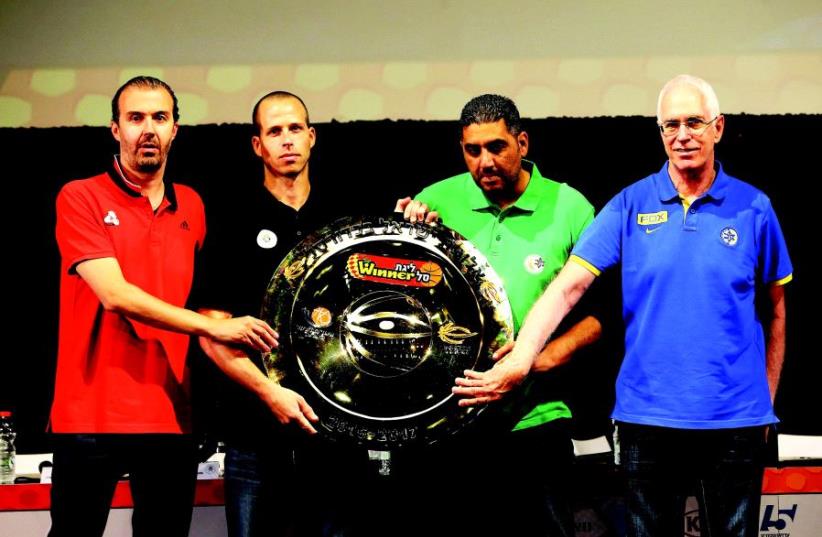 Coaches from 4 BSL Final Four teams (from left) Hapoel Jerusalem (Simone Pianigiani), Maccabi Rishon Lezion (Shmulik Brenner), Maccabi Haifa (Ofer Rahimi) and Maccabi Tel Aviv (Arik Shivek)
(photo credit: UDI ZITIAT)
Advertisement
Maccabi Tel Aviv and Hapoel Jerusalem aim to book their first showdown in the BSL final since 2007 on Monday, but Maccabi Haifa and Maccabi Rishon Lezion have every intention of spoiling the party in the Final Four semifinals at Yad Eliyahu Arena.Since they last met in the BSL title game, either Maccabi or Jerusalem have featured in every final. Maccabi’s streak of 21 consecutive finals ended in 2015, with the yellow-and-blue being knocked out in the semifinals in the past two seasons, going consecutive years without winning the championship for the first time after 50 years.Jerusalem replaced Maccabi as the favorite in the past two finals, winning a historic title two years ago before suffering a shock loss to Rishon Lezion last season.Jerusalem faces Rishon in a repeat of last season’s final in the first semifinal on Monday before Tel Aviv plays Haifa, just as it did in the finals in 2013 and 2014.Maccabi and Jerusalem both posted record budgets this season, but both finished with disappointing regular season records.Maccabi set two negative club records by losing 14 regular season games and only finishing in fourth place. Hapoel didn’t fare much better, finishing with the same record but one place ahead of Maccabi in the standings thanks to the head-to-head tiebreaker.But playoff seeding has proven to be of little significance this season, with top seed Hapoel Holon being sent packing by No. 8 Maccabi Haifa, while No.7 Rishon surprised No. 2 Hapoel Eilat. Jerusalem only advanced after becoming the third team to erase a 0-2 deficit in a best-of-five series, surviving a tense showdown against Ironi Nahariya.Maccabi’s 3-0 sweep of Bnei Herzliya ensured there was at least one series that went according to expectations, although after the season it endured, the yellow-and-blue was taking nothing for granted.Arik Shivek became the team’s fourth head coach of 2016/17 after replacing Ainars Bagatskis ahead of the start of the playoffs.Maccabi has only played three games under his guidance. But the 3-0 sweep of Herzliya by an average of 25.7 points per game has transformed the team into the favorite at the Final Four.Haifa only advanced to the playoffs in the final day of the regular season, but it outplayed No. 1 seed Holon on the way to a 3-1 win.Nationalized American guard John DiBartolomeo will be looking to build on his superb performance against Holon, with both Maccabi and Jerusalem rumored to be interested in his services.He averaged 22.5 points, 3.8 assists and 3.8 rebounds in 28.3 minutes per game in the quarterfinals, doubling his point average from the regular season while also improving his already impressive efficiency.DiBartolomeo hit 61.5 percent of his two-point shots, 67.9 percent from three-point range, while connecting on all 17 of his attempts from the freethrow line.Jerusalem will have its hands full against an improving Rishon side, which beat Eilat on the road in last week’s decider.“I don’t think any team can be regarded as the favorite in this Final Four,” said Jerusalem captain Yotam Halperin. “Anything can happen.”