Most influential Jews in sports 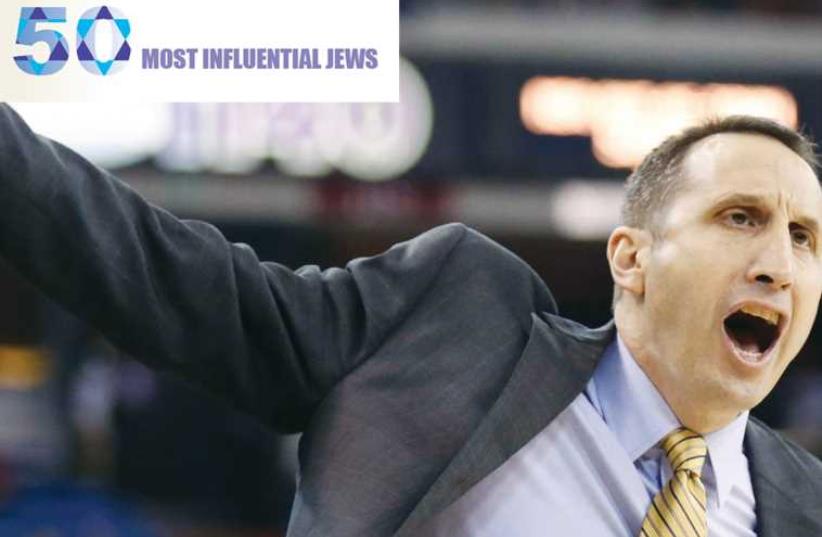 David Blatt
(photo credit: REUTERS)
Advertisement
The Jerusalem Post has put together its annual list of '50 most influential Jews' who have impacted the world last year, and have the potential to affect change in years to come.

David Blatt
A coach fit for a kingDavid Blatt has been a household name in Israel for years, but has only truly become renowned across the sporting world in recent months.The 55-year-old Boston native, who moved to Israel over 30 years ago, returned to the US last summer to take on a dream job as the head coach of the NBA’s Cleveland Cavaliers.He has since experienced a roller-coaster of highs and lows.Blatt was originally brought in with the goal of helping a struggling franchise make its first steps back toward the playoffs.However, following the signing of top basketball player LeBron “King” James, and the trade for all-star Kevin Love, the expectations from Blatt soared, with the Cavs transforming overnight into a potential championship contender.After initially struggling, the Cavs hit their stride at the turn of the year, with Blatt weathering the early storms that at one stage threatened to drown him, leading the team to a 53-29 record and a division title.While he has certainly experienced some growing pains, Blatt has the Cavaliers in the Eastern Conference finals and is aiming to become the first coach since Pat Riley in the 1981-82 season to win an NBA championship in his rookie year as a coach in the league.The Cavs’ appointment of Blatt came as a surprise, even though he had just led Maccabi Tel Aviv to an unforgettable Euroleague triumph – the club’s first in nine years and sixth overall.A day after winning the Israeli league title, Blatt announced that he was leaving Maccabi to coach in the NBA, although he had yet to sign a deal with any team. He spent the following days interviewing with the Cavaliers for their head coaching position, and in a development that stunned the basketball world, he was handed the job on June 20, making him not only the first Israeli to coach in the NBA, but also the first person to make the leap from Europe to the NBA as a head coach.Blatt had coached Maccabi for the previous four seasons. He was also a key contributor to the yellow-and-blue’s remarkable success at the turn of the century, as an assistant to Pini Gershon for three seasons (1999/2000, 2000/01, 2003/04) and a head coach (2001/02, 2002/03).Blatt, who originally moved to Israel in the early 1980s after playing for the USA basketball team in the 1981 Maccabiah, spent six seasons away from Israel after leaving Maccabi in 2004.The Princeton University graduate led Russian club Dynamo St. Petersburg to the FIBA EuroCup in 2004 before moving to Italy’s Benetton Treviso and winning an Italian championship and cup in his two seasons at the club.Blatt also led the Russia national team to the European title in 2007, while also guiding the side to a surprise bronze medal at the 2012 London Olympics.While there are other Jewish sports personalities who may have more global “influence” than Blatt – at least by the strict definition of the term – few have carried themselves as he has, as a noble ambassador on the big stage in a way that can make all Jews and Israelis proud.