Motosikiliztim and the making of the first Maccabiah

That the first Maccabiah actually did take place, despite very long odds against it, still seems miraculous. 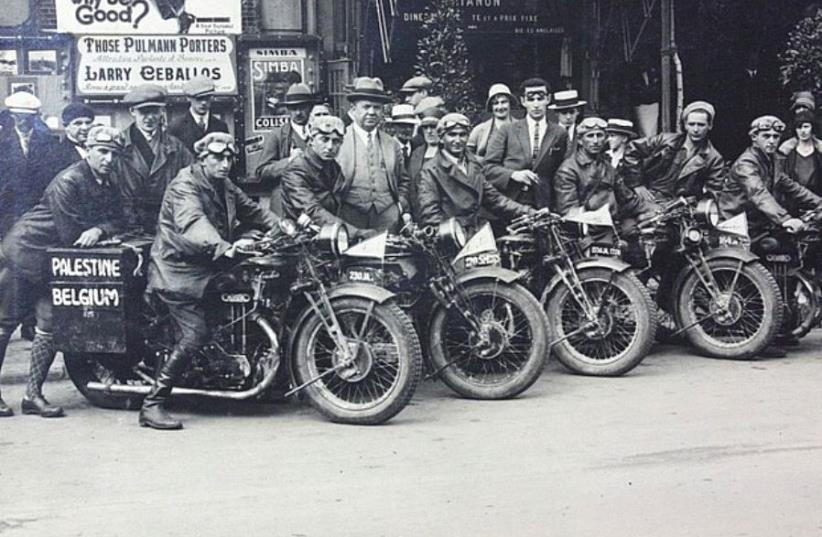 Motorcyclists at the first Maccabiah games
(photo credit: Courtesy)
Advertisement
The 1929 Maccabi World Congress convened in Prague at a tough time for Jews in Central and Eastern Europe, where the bulk of Maccabi clubs were. Official apathy (at best) of many governments towards antisemitic violence made organizing large-scale Jewish sports events increasingly difficult. So while they agreed to it, at least some delegates must have regarded the “Jewish Olympic Games” concept presented by Yosef Yekutieli from Eretz Yisrael as a truly madcap Zionist scheme. Wjerhy would British authorities allow it? And even if they did, in all of Mandatory Palestine there was no stadium, no swimming pool, not even an athletics track. Who would pay to build them? Could Maccabi in any country afford to send athletes? How would Jewish athletes even hear of the games Yekutieli called the Maccabiada?Doubts deepened as the really bad news of 1929 emerged: 133 Jews were massacred and 17 Jewish communities were evacuated due to Arab violence in Palestine; Wall Street crashed; the misery of the Great Depression gripped vast populations.That the first Maccabiah actually did take place, despite very long odds against it, still seems miraculous. It is still a mystery why Palestine high commissioner Sir Arthur Wauchope ignored the warnings of his staff and superiors in London that the Maccabiah would camouflage illegal entry into Palestine of young Zionist immigrants.The practical side was entirely due to Yekutieli and his Organizing Committee colleagues: JNF gave land for the stadium, designed by an engineer named Shlomo Arazi; Maccabi funded materials used by the “First Hebrew City” (Tel Aviv, pop. 36,000) to build it; Palestine Railways gave tons of burnt cinders to surface a crushed coal running track; part of Haifa Port was cordoned as a seawater swimming and water polo venue.Publicity was the toughest issue. The Organizing Committee had no means of instant communication; international broadcast radio, TV, Internet didn't exist. The world in those days moved at snail mail and telegraph speeds, and Yekutieli's “Motosikilizt” solution is a prime example of his astonishingly inventive genius.He first talked to Arazi, who brought in his biker brother Ephraim Tenenbaum. They recruited others, and 11 Motosikliztim made an epic ride to Maccabi's 1930 World Congress. Greeted by ecstatic Jewish crowds wherever they went, they were fêted in the local press everywhere as modern Maccabees from Jerusalem bringing news of the Jewish Olympics. After two days of official farewells in Tel Aviv, they reached Haifa on June 4, proceeded through the French Mandate of Lebanon to Beirut; took a ship to Istanbul, Turkey, and thence via Constantza, Czernowitz, and Bucharest in the Kingdom of Romania; Kassa in Czechoslovakia; Lvov, Poznan, Warsaw and Lodz in Poland; Breslau, Berlin, Leipzig, Frankfurt and Cologne in Weimar Germany; Paris, France, and reached their goal: Antwerp, Maccabi's Congress and European Games over July 3-7, exactly 87 years ago this week.To appreciate what they achieved: modern dual or multi-lane inter-urban highways, freeways and expressways didn't exist anywhere in the world. To appreciate Yekutieli's genius: No one, not even motorcycle manufacturers, had ever made short-distance motorcycle publicity stunt rides, let alone an ultra-long distance international ride. Though advancing rapidly, modern Hebrew lacked words to describe it. “Motosiklizt” is the Yiddishism for “motorcyclist,” borrowed from Polish. Adding the suffix “-im” made it the plural motorcyclists in Hebrew, which hadn't yet acquired the term אופנוע = 'Off-No'ah'. Newspapers headlined this and later 1930s long-distance publicity rides as המוטוציקלטיסטים של מכבי = “The Motosikiliztim of Maccabi.”