No longer the new kid on the block

With one year under his belt, Cleveland Cavaliers coach David Blatt is feeling a lot more confident managing one of the most coveted gigs in sports. 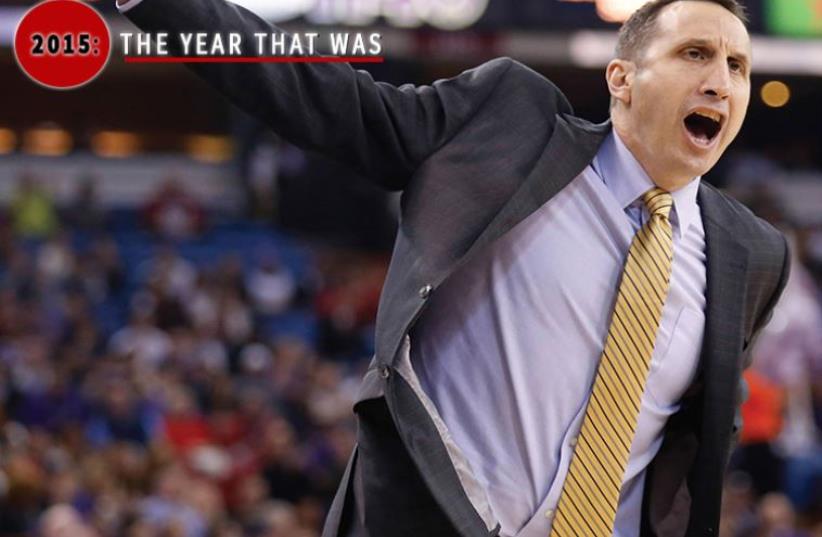 David Blatt
(photo credit: KELLEY L COX-USA TODAY SPORTS,JPOST STAFF)
Advertisement
One can hardly blame the NBA establishment, whether it be the media, veteran coaches or star players, for struggling to accept David Blatt’s presence.Not only did the Boston-born Israeli take one of only 30 head coaching positions in the league, but he became the envy of almost all his colleagues after being hired to coach the Cleveland Cavaliers in the summer of 2014.The return of four-time MVP LeBron James to Ohio and the signing of All-Star Kevin Love shortly after piled the pressure on Blatt, who was rumored to be on the verge of being sacked at the beginning of the year.Such was Cleveland’s start to last season that Cavaliers general manager David Griffin was forced to speak to the media at the beginning of January and insist the first-year coach wasn’t going anywhere, despite speculation that a rift had developed.That seems like a long time ago now, with Blatt ultimately guiding the Cavs to the NBA Finals, only being beaten by the Golden State Warriors after losing star guard Kyrie Irving and Love to injuries. Cleveland is also setting the pace in the East this season and is a clear favorite to return to the Finals.Blatt has won over most of his doubters and admits that he feels far more comfortable this year, having one season in the NBA under his belt.“It is very different,” he told The Jerusalem Post. “I’m a lot more familiar and just have a better idea what to expect and what to focus on and learned how to manage the season the proper way. Of course the familiarity with the players that we had last year and have come back makes it a lot easier.”Blatt said he can understand the reception he received last season.“When you are new to any situation, obviously you may be looked at in a certain way,” he explained. “And my particular situation is very new relatively to a normal career path for an NBA coach. But certainly starting this year is easier, having another year under my belt and our team having had such success.”The 56-year-old Blatt, who moved to Israel over 30 years ago after playing for the USA basketball team in the 1981 Maccabiah, was surprisingly appointed as the head coach of the Cavs after guiding Maccabi Tel Aviv to the Euroleague title in 2013/14. Blatt coached Maccabi in the previous four seasons and was also a key contributor to the yellow-and-blue’s remarkable success at the turn of the century as an assistant to Pini Gershon for three seasons (1999/2000, 2000/01, 2003/04) and a head coach (2001/02, 2002/03).Blatt spent six seasons away from Israel after leaving Maccabi in 2004. The Princeton University graduate coached in Russia, Italy, Turkey and Greece and also led the Russia national team to the European title in 2007 and an Olympic bronze medal at the 2012 London Games.While he is usually perceived by the media in the US as an American who has returned home, Blatt does not hide the fact that he is a proud Israeli.“I’ve always felt in my different jobs, whether in Italy, Russia or any different country that I worked in, and even coaching Maccabi, a great deal of pride representing Israel as an Israeli citizen and an Israeli coach.One of the best things about last season was how the people in Israel supported what we were doing and what I was doing. It was really an inspiring thing for me, and until this day I’m appreciative of it.”Blatt said that having the experience and the time to experiment and learn the NBA last season has made him a better coach, but after the trials and tribulations of his first season he knows there is no point in looking too far ahead.“First of all there is no guarantee we will get back to the Finals,” he said. It will be a tough road to get there. You can’t naturally assume that you will get that far. You have to set goals, and I think the main thing is to get to the playoffs healthy, because we played the Finals without two of our main players. We have shown that we know how to play, so we need to continue and develop our game and improve as a team and to stay healthy.”The past two years have been nothing short of incredible for Blatt, so one can hardly blame him for not wanting to reveal his aspirations for 2016.“Every year brings its own set of challenges,” he noted. “In life you have ups and downs, and you have to try and stay consistent and try to do the best you can and have others do the best that they can and you hope things work out well.“I’ve always believed that you are what you do,” he added. “That is kind of my motto. Talking about things and making all these plans are important, but at the end of the day you are what you do. If you work hard, you give it your best, you care about what’s going on with you and the people you are working with, I believe the other things will work out pretty good.”