Eli Ohana was brimming with confidence regarding Beitar Jerusalem’s future after being officially unveiled as its new boss on Tuesday. 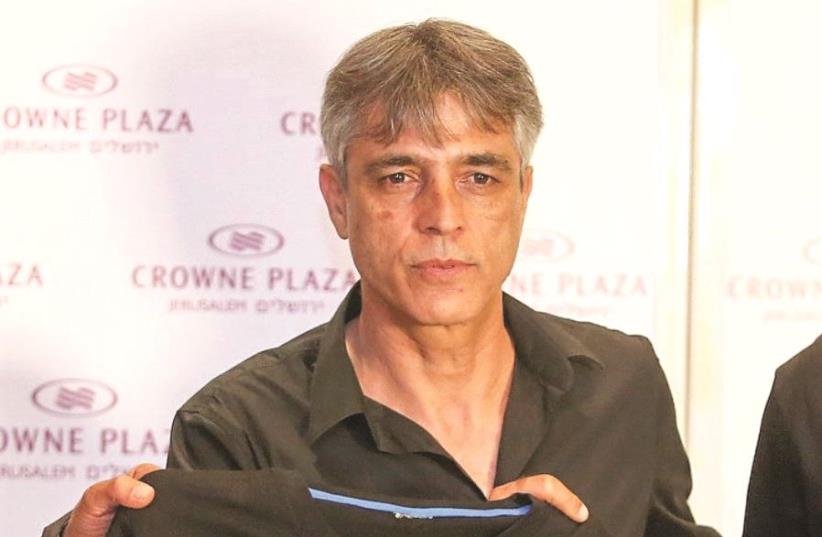 Eli Ohana poses with a T-shirt bearing his profile from his playing days at Beitar Jerusalem after being unveiled as the club’s new boss yesterday.
(photo credit: DANNY MARON)
Advertisement
Eli Ohana was brimming with confidence regarding Beitar Jerusalem’s future after being officially unveiled as its new boss on Tuesday.Ohana signed a five-year deal last week that made him Beitar’s top professional and administrative authority.Owner Eli Tabib is not allowed to be involved in the running of the club over the next two seasons, the result of a ruling made by the Israel Football Association’s ownership transfer committee last summer following his conviction in June 2015 of assaulting a minor and of disruption of justice.The committee didn’t bar Tabib from retaining his ownership of the club, but ordered him to disconnect himself from its running.With Ohana being a good friend of Tabib - and having a cult status among Beitar fans - he was a natural choice to take charge, leaving his role as a TV commentator for the position.“Beitar has aspired to win titles throughout its history and we want to continue that,” said Ohana on Tuesday.“That may not happen straight away and I can’t guarantee that we will win a title next season. But that is our goal. I have come here not for one or two years. Tabib accepted my request to sign a five-year deal and that sends a very clear message. The organization is in a good position and we want to continue and improve it, hopefully while also winning titles.”Ohana said he is determined to continue the fight against the racist fans that have tarnished the club’s image over the years.“Our demands are very simple. Violence and racism don’t belong in Beitar’s stadium,” explained Ohana, who insisted he would sign an Arab player if the right opportunity arrived. “Beitar isn’t a racist club. There is only a small group of fans which is ruining it for everyone else.”Ohana received the nickname “the prince” from Beitar fans in the 1980’s, helping the club to its first-ever league championship in 1987. He went on to win the European Cup Winners Cup with Belgian club Mechelen in 1988 before returning to Beitar in 1991 while it was in the second division. He led the team to promotion and to a championship the following season before ultimately retiring in 1997.Ohana also coached Beitar between 1999-2000 and 2003-2005.“Not many people can teach me about Beitar,” added Ohana. “That is why it was easy for me to say yes. I think that 99 percent of the people are happy about my return and that makes me feel good.”