All seven of Israel’s swimmers at the 2016 Games have already tasted competition, but so far none has come close to reaching a semifinal. 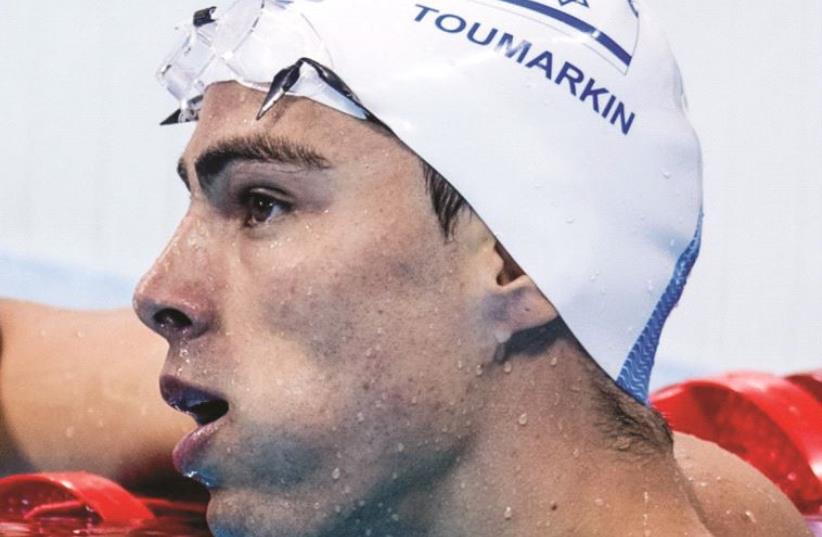 Israeli swimmer Yakov Toumarkin
(photo credit: ASAF KLIGER)
Advertisement
With nothing to show from the first four days of action in the pool, Israel’s swimmers look to finally make their mark at the Rio Olympics on Wednesday.All seven of Israel’s swimmers at the 2016 Games have already tasted competition, but so far none has come close to reaching a semifinal, and they haven’t even managed to set any national records.The delegation’s two leading swimmers, Yakov Toumarkin and Gal Nevo, will aim to change that on Wednesday when they compete in their main events.Toumarkin takes part in the 200-meter backstroke heats on Wednesday, an event in which he finished in seventh place at London 2012, the best-ever result for an Israeli swimmer at the Olympic Games.Toumarkin took part in his secondary event, the 100-meter backstroke, on Sunday, but he registered a time almost one second slower than his personal best and finished in 27th place out of 39 participants.“I’m really disappointed. I looked at my time at the end of the race and I couldn’t believe it,” said Toumarkin, whose first goal will be to among the top 16 who will contest the semis in the evening session.“I’m in good shape so I expected more from myself. The 200m back is a different race and I’ll be more comfortable there.”Nevo participates in the 200m IM heats on Wednesday, an event he finished in 10th place in London 2012. Nevo registered a disappointing time of 4:18.29 minutes in the 400-meter IM on Saturday, almost seven seconds slower than his personal best, finishing in 19th place out of 27. He was 26th out of 29 in the 200m butterfly heats on Monday.Andrea Murez takes part in her first individual event in Rio on Wednesday when she competes in the women’s 100m freestyle.Murez pulled out of the 200m free earlier in the week as she is still recovering from sinusitis.Israel will also be represented in the judo arena on Wednesday, although unlike the previous two days in which Sagi Muki and Yarden Gerbi competed, the expectations from Linda Bolder are far lower.The 29-year-old Bolder, who takes part in the women’s under-70kg competition, began representing Israel in 2015 after following her husband to the country from the Netherlands.She has yet to win a medal at a major competition for Israel, but did claim the gold medal at the Grand Prix event in Havana, Cuba in January. It remains to be seen in what shape she’s in, as she’s been sidelined with a left knee injury since March.The men’s and women’s 470 Class sailing events also get under way on Wednesday.Eyal Levin and Dan Froyliche secured a berth in Rio despite only managing a 24th-place finish at the world championships in Haifa last year.Gil Cohen and Nina Amir only first teamed up in March in a desperate final bid to reach Rio. They already did so in their first competition together, finishing in ninth place in Trofeo SAR Princesa Sofia.