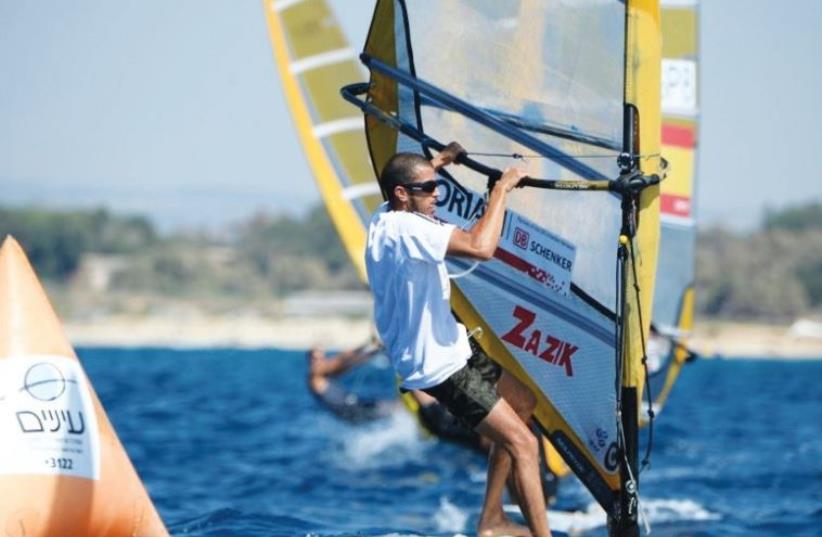 Shahar Zubari won the Israel national windsurfing title yesterday, finishing ahead of Yoav Omer and Nimrod Mashiah at Mikhmoret.
(photo credit: AMIT SHISEL)
Advertisement
Oman canceled the visas of Israel's representatives at next weekend's windsurfing world championships, casting further doubt over their participation which was already uncertain.A letter sent to the Israeli Sailing Association by the organizing committee said that the visas issued to the windsurfers back in July had been revoked.The surfers were already battling to take part in the championships, with the Ministry of Culture and Sport notifying the ISA on Tuesday that the delegation is not allowed to fly out to the Muslim Sultanate on the southeastern coast of the Arabian Peninsula due to security reasons. The Ministry explained that the Shin Bet (Israel Security Agency), which is responsible for the safety of Israeli national teams when competing abroad, had not authorized the trip to Oman.The Shin Bet said it had failed to reach an agreement with local security forces and therefore won't permit the windsurfing delegation's visit to the country.The ISA, the Olympic Committee of Israel and Israeli International Olympic Committee member Alex Gilady were working to solve the matter.They are now also in contact with the International Sailing Federation and the IOC in order to ensure the Israelis will be reissued new visas.