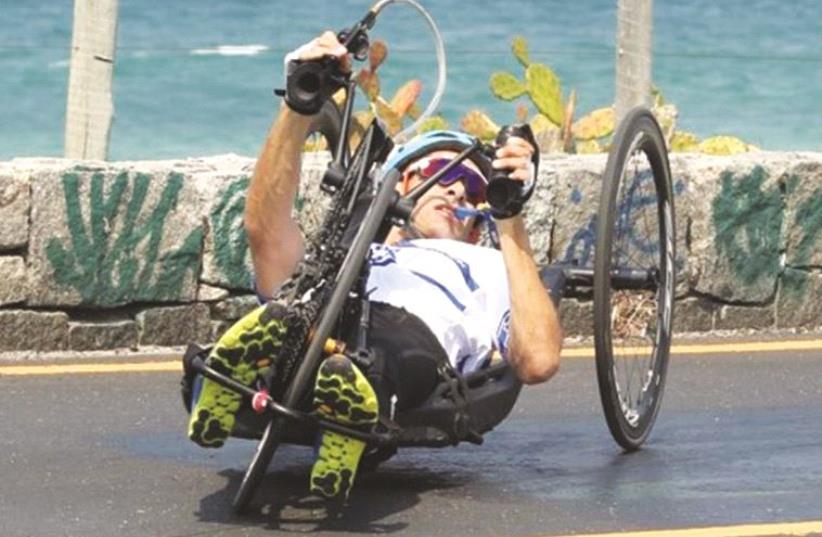 Israeli cyclist Kobi Lion
(photo credit: KEREN ISAACSON)
Advertisement
Israel’s Kobi Lion ended the men’s hand cycling H2 (tetraplegics with minor upper limb impairment) time trial in sixth place at the Rio Paralympics on Wednesday, a competition in which he won a silver medal at London 2012.The 40-year-old registered a time of 36:50.45 minutes and required treatment at the end of the race due to a fever.Pascale Bercovitch will take part in the women’s KL2 (partial leg and trunk function alongside good arm strength) canoe sprint final on Thursday. She qualified after finishing her semi on Wednesday in third place in 1:02.25 minutes. The 49-year-old is taking part in her third Paralympics after competing in hand cycling and rowing in previous games.Shooter Doron Shaziri, who claimed a bronze medal in the men’s 50-meter rifle three positions final, ended the mixed R6-50m rifle prone competition in ninth place on Wednesday with a score of 614.8 points in the SH1 category (shooters able to support a firearm without a stand.) Meanwhile, former Formula One driver Alex Zanardi won his third Paralympic gold medal on Wednesday, a day before the 15th anniversary of the Champ Car crash that cost the Italian both legs and nearly his life.The 49-year-old won the 20km H5 hand-cycling road time trial in Rio de Janeiro to add to the two golds he won on his Paralympics debut in London four years ago.“Normally I don’t thank God for these type of things as I believe God has more important stuff to worry about,” he told NBC television. “But today is too much. I had to raise my eyes and thank him.“I feel very lucky, I feel my life is a never-ending privilege.”Zanardi, a two-time champion in the US-based Champ Car series that is now IndyCar, competed in 41 Grand Prixs between 1991 and 1999 with his final season at Williams.He had both legs amputated above the knee, with his heart stopping seven times as he lost all but a liter of the blood in his body, after the horrific crash at the Lausitzring in Germany on September 15, 2001.The Italian was leading the race when he lost control of his Reynard- Honda in the final laps and Canadian Alex Tagliani ran into him at more than 350 kilometers/ hour.Reuters contributed to this report.