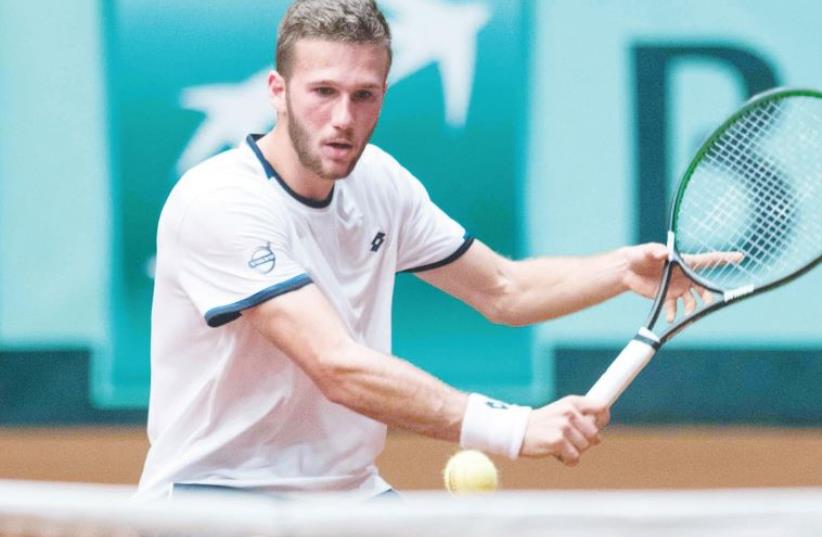 Edan Leshem.
(photo credit: NIR KEIDAR)
Advertisement
WASHINGTON — Holding steady against the world’s No. 77 singles player for the duration of a 6-6 set, Edan Leshem looked like he was going to make his presence known on the ATP world tour in his first ever appearance. Then, a drizzle turned into pouring rain and a four hour delay, robbing the 20-year-old of all momentum in his 7-6 (1), 6-0 loss to Marcos Baghdatis.Leshem was able to hold with the 32-year-old from Cyprus early.Throughout the night, Leshem consistently hit hard serves and return shots, matching power with power, but when he needed to, was unable to outwit Baghdatis, who in his career has been ranked as highly as No. 8 in the world.The match resumed just after 9 p.m. after an hour to dry the court at grandstand 1, and right away started off poorly for Leshem; as he was aced on the first point to end the first set. He didn’t fare much better in the second, falling behind 2-0 early. Leshem came close to winning the third game, only to give away advantage in a spirited point that eventually went in Baghdatis’ favor."Marcos played very good today," Leshem said. "Especially on the second set, and I didn't come with enough focus for the second set after the rain delay." Leshem shrugged off concern about the mistakes he made in his first tour match. It is tough to blame him considering the opening of the second set came five hours after the first."I just think I didn't come back from the rain delay," Leshem said. "I wasn't there on the court, I didn't play the tennis I did in the first set." He has more than just this match to examine as he continues to make a name for himself on tour. In addition to his first match on the ATP, the Citi Open was his third tournament of July. After an exciting week that included two qualifiers to gain entrance to the main draw, it might be a while before the American audience sees him again."At the moment I am going back home, I played a lot of tournaments I need some training," Leshem said. "Probably will go to Bangkok and China end of August and then come back to Israel for the Davis Cup against Ukraine." Back in Israel, Leshem will train under Amos Mansdorf, who won on the ATP tour for the final time in Washington in 1993 at the then-called Washington Open."Amos said it's a different thing," Leshem said. "You play with the big guys, you have to stay with them. They will not give you anything, you have to play good tennis, you have to be aggressive all the time and you have to be focused every point." He leaves with just a taste of the professional circuit, but Leshem, who showed flashes of hard-hitting tennis and an aggressive flare, expressed anticipation that those elements of his game will become more than just occasional."You see all the guys here; they're all tall and strong and hitting the ball very hard," Leshem said. "I can do the same. I think it's a positive thing for me that I can play strong and fast and that I have a good serve."