Sela rallies to capture Nottingham title ahead of Wimbledon 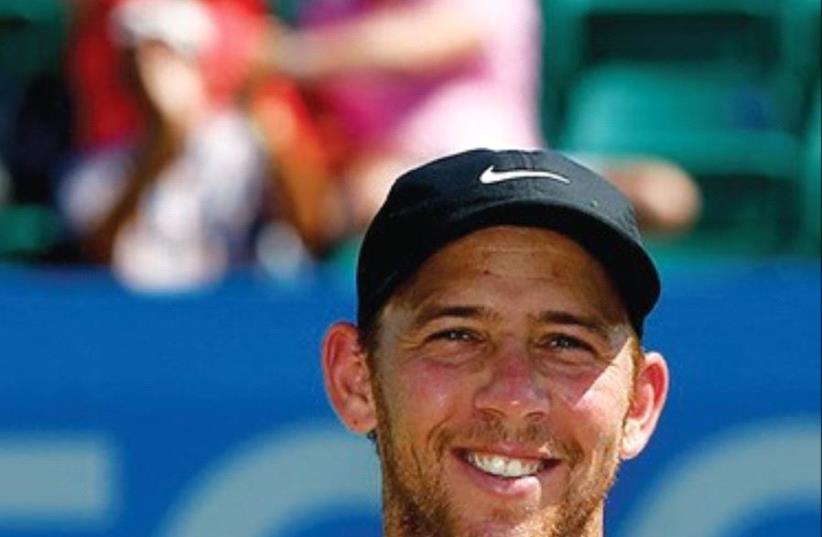 Dudi Sela poses with his trophy yesterday after winning the ATP Challenger Tour title in Nottingham, England.
(photo credit: ATP CHALLENGER TOUR)
Advertisement
Dudi Sela enters Wimbledon in promising form after picking up some much-needed confidence on Sunday with his second ATP Challenger Tour title of the year and 22nd of his career.The 32-year-old Israeli, ranked No. 98 in the world, defeated Italy’s Thomas Fabiano (103) 4-6, 6-4, 6-3 in the final in Nottingham, England, in one hour and 55 minutes.Sela, who is expected to climb at least 15 places in Monday’s rankings, missed his first Grand Slam tournament in four years last month. He chose not to play in the Roland Garros qualifiers after just falling short of an automatic berth in the main draw.The best achievement of Sela’s Grand Slam career came at Wimbledon when he reached the last-16 in 2009.However, he hasn’t progressed past the first round at the All England Club since 2011.In other tennis news, big-serving world No. 16 Lucas Pouille tuned up for Wimbledon by muscling past Spanish veteran Feliciano Lopez 4-6, 7-6 (5), 6-4 in just over two hours on Sunday to win the Stuttgart Open.The 23-year-old, seeded fourth, fired a total of 29 aces on his way to his second title of the year following his victory in Budapest in April.The 35-year-old Lopez, who last reached a final in August 2016, was aiming for a sixth career title and third on grass.Elsewhere Sunday, Luxembourg’s Gilles Muller out-aced the record-breaking Ivo Karlovic in a landmark battle of the big-serving veterans to lift the grass-court title in Den Bosch.Croatia’s 38-year-old Karlovic became the first man to ever pass the milestone of 12,000 aces as he blasted down another 19, yet he still could not stop his 34-year-old opponent coming out on top 7-6 (5), 7-6 (4) in the Wimbledon warm-up tournament.With a combined age of 72, it was the oldest singles final on the ATP World Tour since Hong Kong in 1976 when 42-year-old Ken Rosewall defeated 30-year-old Ilie Nastase.Earlier, Estonia’s Anett Kontaveit, one of the rising talents of the WTA tour, won her first tour title in the women’s final, beating Russian Natalia Vikhlyantseva 6-2, 6-3.Muller, Luxembourg’s best-ever player, has enjoyed a remarkable season, winning his second title of the year after previously never having managed to earn one in 13 years of trying.The left-hander even blasted 22 aces to outperform Karlovic, the most prolific purveyor of aces the game has ever seen, winning two tiebreaks after neither man had enjoyed even the sniff of a break point in the one hour 35 minute contest.Twenty-one-year-old Kontaveit, who had already reached one WTA final and beaten world No. 1 Angelique Kerber this season, overcame a dip in concentration at the start of the second set to earn her victory in just under an hour and a quarter.The victory will shoot the young prospect from Tallinn from world No. 49 to a new career-high of 36 when the rankings are announced on Monday.Reuters contributed to this report.