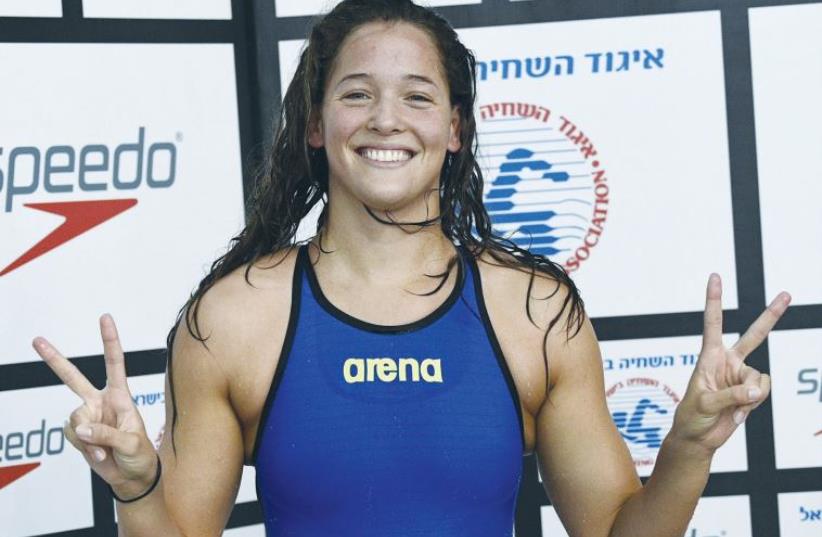 Keren Siebner continued her impressive form at the Israel national swimming championships yesterday when she claimed the gold medal in the 100-meter butterfly.
(photo credit: AMIT SCHUSSEL)
Advertisement
With Israel’s Olympic-bound swimmers suffering from the strain of their final preparations for the Rio Games, the on-going national championships at Wingate Institute have been all about the lesser names of local swimming.The star of the meet, which got underway last Thursday and ends on Monday, has been Keren Siebner, who took her sixth gold medal of the championships on Sunday.Siebner, who missed out on a place in Rio in heartbreaking fashion, added the titles in the 100-meter butterfly and 4X100m medley relay to the ones she previously won in the 200m butterfly, 4X200m freestyle relay, 200m backstroke and 4X100m freestyle relay.Siebner clocked a time of 58.92 seconds in the 100m fly on Sunday, beating out Olympian Amit Ivri. The 26-year-old also finished ahead of Ivri in the relay, with the former’s Hapoel Dolphin Netanya taking first place in the 4X100m medley relay in front of the latter’s Hapoel Emek Hefer.“The past weekend I found out that I won’t be taking part in the Olympic games this summer. I missed the spot by 0.01 seconds [the smallest margin possible],” Siebner wrote on Facebook last week. “As much as it hurts, and hard to accept, I don’t regret anything. I gave it all I got, I believed in myself, and most importantly - I DARED.”Siebner is also responsible for the only individual national record set in the championships to date. She did so in the second day of the competition on Friday, clocking a time of 2:13.10 minutes in the 200m backstroke, 29 hundredths of a second faster than the previous record.Another Olympian who came up short on Sunday was Gal Nevo, who finished second to Itay Gurevich in the 400m individual medley.Israel will send six swimmers to Rio, with Ivri and Nevo to be joined by Yakov Toumarkin, Ziv Kalontarov, Andrea Murez and Zohar Shikler.