Before Maccabi and Beitar discover who they will face in the playoffs, Hapoel Beersheba will find out the identity of its rival in the Champions League playoffs. 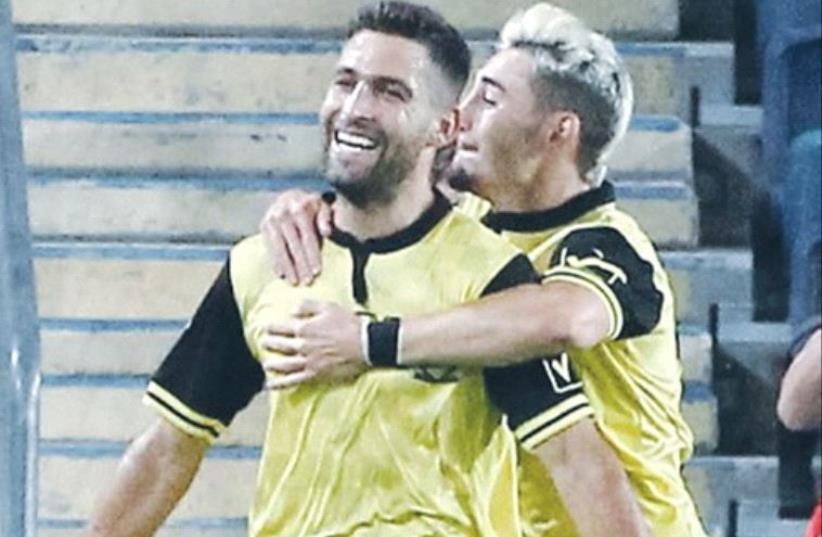 Beitar Jerusalem striker Itay Shechter celebrates his first goal of the season with Omer Atzili (right), who netted the team’s opener in last night’s 3-0 win over Jelgava of Latvia in the second leg of the Europa League third qualifying round.
(photo credit: DANNY MARON)
Advertisement
Beitar Jerusalem and Maccabi Tel Aviv comfortably advanced to the Europa League playoffs on Thursday night, capping two excellent days for Israeli soccer following Hapoel Beersheba’s progress to the Champions League playoffs a day earlier.Beitar defeated Jelgava of Latvia 3-0 at Teddy Stadium for a 4-1 aggregate victory in the third qualifying round. Omer Atzili, who is in the midst of arbitration proceedings against Beitar regarding the terms under which he’ll be able to leave the club, scored his fourth goal of the continental campaign from the penalty spot in the 16th minute. Itay Shechter doubled the advantage with a solo effort in the 29th minute and German Marcel Heister put the icing on the cake two minutes into the second half.Maccabi joined Beitar in Friday’s playoff draw around 30 minutes later, beating Pandurii Targu Jiu of Romania 2-1 in Netanya following a 3-1 win in the first leg on the road.Ezequiel Scarione scored the winner in the 80th minute, with Marian Pleasca (57) initially canceling out Nosa Igiebor’s 24th-minute opener.Before Maccabi and Beitar discover who they will face in the playoffs, Hapoel Beersheba will find out the identity of its rival in the Champions League playoffs.Beersheba took a stunning step towards realizing its Champions League dream and reaching the group stage on Wednesday night, registering a major upset to reach the playoffs with a 1-0 win over Greek powerhouse Olympiacos at Turner Stadium. The first leg in Athens ended in a 0-0 deadlock.Beersheba’s potential rivals in the playoffs are: Viktoria Plzen of the Czech Republic, Red Bull Salzburg of Austria, Celtic of Scotland, APOEL Nicosia of Cyprus and Legia Warsaw of Poland. The first leg will take place on August 17-18, with the second leg to be held a week later.“This is the biggest win of my career,” said Beersheba coach Barak Bachar. “It isn’t only that we advanced but the way we advanced. We dominated the second half. It was amazing. The guys gave everything and this is a great achievement.”Beersheba has already secured itself continental soccer deep into the winter, as even should it lose in the playoffs it will receive a place in the Europa League group stage.As a result, Beersheba is guaranteed 5.4 million euro from UEFA prize money alone.Beersheba, which claimed its first Israeli championship in 40 years last season, is looking to become the sixth Israeli team to play in the Champions League group stage.