Maccabi and Beersheba comfortably progressed to the semifinals on Wednesday, building on their first leg victories to join Maccabi Haifa and Bnei Sakhnin in the last four. 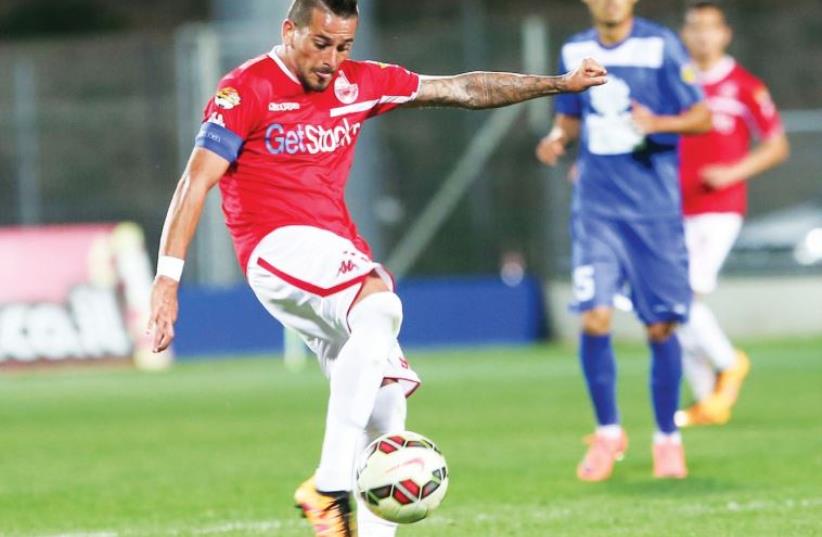 Hapoel Beersheba midfielder Maor Buzaglo attempts a shot
(photo credit: DANNY MARON)
Advertisement
State Cup holder Maccabi Tel Aviv and last season’s beaten finalist Hapoel Beersheba are hoping to be kept apart in Thursday’s semifinal draw and remain on course for a second straight meeting in the final.Maccabi and Beersheba comfortably progressed to the semifinals on Wednesday, building on their first leg victories to join Maccabi Haifa and Bnei Sakhnin in the last four.Maccabi, which thrashed Beersheba 6-2 in last season’s memorable final, entered the second leg against Hapoel Kfar Saba with a 3-0 lead from the first match and cruised to a 2-0 victory on Wednesday, completing a 5-0 win on aggregate.Maccabi coach Peter Bosz made the most of the opportunity and gave many of his fringe players rare playing time, resting star midfielder Eran Zahavi among others.The yellow-and-blue’s second string side was still far too good for Kfar Saba, with Shlomi Azulay (22) and Eden Ben-Basat (45) scoring for the hosts.Beersheba visited Beitar Tel Aviv/Ramle of the second division with a 2-0 lead from the first match and claimed another 2-0 victory to triumph 4-0 on aggregate.Beersheba, which holds a five-point gap over Maccabi Tel Aviv at the top of the Premier League standings, also gave many of its star players a break on Wednesday, including veteran striker Elyaniv Barda.Coach Barak Bachar handed three youth team players their debuts in the second half, and they proved that the club has plenty of home-grown talent on which to build its future.Dan Biton’s goal in the 30th minute ensured Tel Aviv/Ramle lost any lingering hope it may have had of mounting a second-leg comeback, but what will be remembered from the match is Musa Tarbin’s exquisite solo effort with 10 minutes to play. The teenager coolly dribbled his way past four players to score his first senior goal for Beersheba.“You don’t see a goal like that every day,” said Bachar. “Tarbin has showed us what he can do in training and while playing for the youth team. The club has many young talents and a bright future.”Bachar insisted that every opponent in the semis will be equally tough.“Every match will be difficult. A game against Bnei Sakhnin will be just as tough as one against Maccabi Tel Aviv or Maccabi Haifa and that is not a cliche. Four fantastic teams have reached the semis and there will be a great atmosphere.”Despite holding a promising lead at the top of the league standings, and reaching the cup last four – not losing a match in either competition since the end of September – Bachar is not getting carried away.“We must remember that we haven’t won anything yet. Neither the cup nor the championship,” noted Bachar. “We are heading in the right direction, but it is far too early to begin celebrating.”In other soccer news, Danny Golan held his first training session as the coach of Maccabi Petah Tikva on Wednesday. Golan left Hapoel Ramat Gan of the National League and will be guiding a side in the top flight for the first time in his career.“I couldn’t turn down this offer,” said Golan. “In every risk there is an opportunity.”Ben-Shimon resigned as the coach of Petah Tikva on Monday. Petah Tikva led the standings for the first month of the season after winning its first four matches.However, it lost its next four games and has been inconsistent ever since. Ben-Shimon led Petah Tikva to its first title in 12 years after winning the Toto Cup, but seven defeats from the past eight games in league action saw the team drop into the relegation playoffs, resulting in the coach’s departure.