“We have a big game coming up on Wednesday, but we arrive with two victories on the road and have two days to recover so that is good for us.” 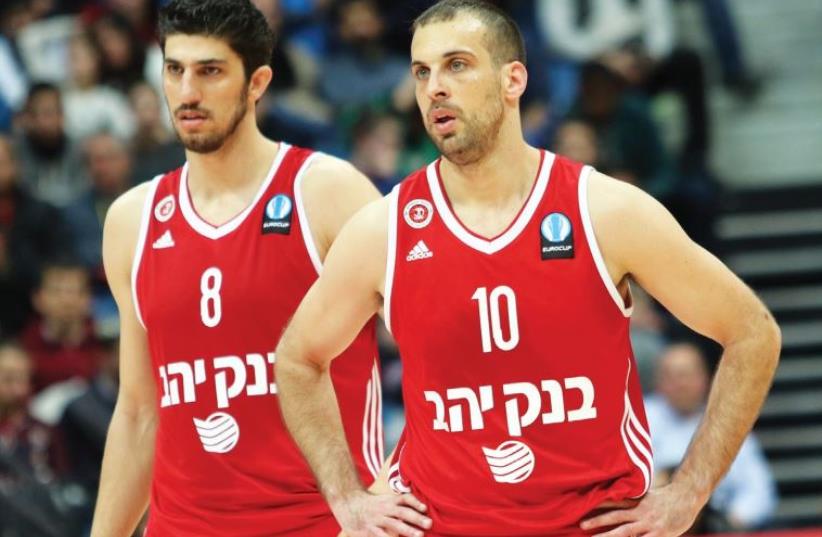 Hapoel Jerusalem guard Yotam Halperin (right) and forward Lior Eliyahu react after their team was eliminated from Eurocup
(photo credit: DANNY MARON)
Advertisement
With two road wins already under its belt, Hapoel Jerusalem is confident of extending its perfect start to the Eurocup regular season when it hosts Lokomotiv Kuban Krasnodar of Russia on Wednesday.Jerusalem improved to 2-0 in Group D with last week’s win at Olimpija Ljubljana, building on the impressive road victory against Valencia in Spain in its opener.Three of Hapoel’s next four Eurocup games will be played at the Jerusalem Arena, with the Kuban contest to be followed by a trip to Ulm in Germany before vists by both Valencia and Ljubljana.Kuban, which has former Jerusalem scorer Matt Janning as well as former Maccabi Tel Aviv guard Taylor Rochestie on its roster, has a 1-1 record, losing 77-62 to Ulm last week.Jerusalem survived a scare to return to winning ways in the BSL on Saturday night, going on a 14-0 game-ending run to beat Ironi Nahariya 75-67. Hapoel did so without Amar’e Stoudemire, who was in the US on personal business, and the injured Jerome Dyson.Stoudemire will be back for Wednesday’s game, but Dyson is still a doubt.“This is a tough moment for us because of the players we are missing,” said Jerusalem coach Simone Pianigiani following the win over Nahariya. “We have a big game coming up on Wednesday, but we arrive with two victories on the road and have two days to recover so that is good for us.”On TV: Eurocup basketball: Hapoel Jerusalem vs Lokomotiv Kuban Krasnodar (live on Channel 20 at 8:15 p.m.)