Swimming: Israelis hoping to end Euros with a bang

Short course event to come to a close with a flurry of finals at Wingate in Netanya. 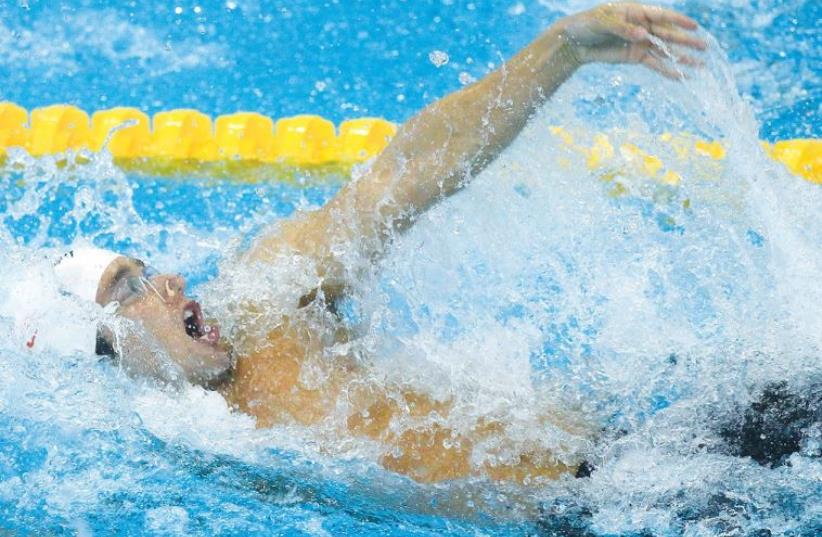 Israeli swimmer Guy Barnea
(photo credit: REUTERS)
Advertisement
Yakov Toumarkin aims to end the European Short Course Swimming Championships at the Wingate Institute in Netanya on the podium on Sunday when he takes part in the 100-meter individual medley final.Toumarkin won Israel’s first medal in the event in the 200m backstroke in the opening day of the championships last Wednesday and qualified for the final of the 100m IM from second place overall on Saturday with an impressive Israeli record of 52.75 seconds.“I didn’t make any mistakes, but I still didn’t expect to qualify for the final from second place,” said Toumarkin, who took a silver medal last week. “The support of the crowd really helped me. I’m very pleased with my current form but I’m not surprised by it as I made special preparations for these home championships.”Toumarkin ended the 200m IM in sixth place on Friday, registering a time of 1:54.68 minutes. Toumarkin finished 1.23 seconds back of third place, with Laszlo Cseh of Hungary winning gold in a new European record of 1:51.36.Guy Barnea will look to join Toumarkin and Gal Nevo, who took a bronze in the 400m IM last week, when he participates in the 50m backstroke on Sunday. Barnea took a silver in the event three years ago.Amit Ivri came tantalizingly close to winning Israel’s third medal on Friday, ending the women’s 100m IM in fourth place. Ivri was just nine hundredths of a second away from third place, clocking a time of 59.09s.“I also finished fourth two years ago,” lamented Ivri. “However, fourth place in Europe is also very respectable. I’ll try and get a medal in the 200m breaststroke on Sunday.”Katinka Hosszu of Hungary won the 100m IM in a new world record time of 56.67s. Hosszu set her second world record in Netanya and already has six gold medals to her name from the championships.“It still hasn’t sunk in. I can’t put this feeling into words,” said Hosszu. “This is my first time in Israel and everything is going well. It is really exciting to be here and the fans are great. I’m having a good time.”Andrea Murez ended the 200m freestyle in seventh place on Saturday (1:56.52m) after finishing eighth in the 100m free (53.43s) a day earlier.Israel’s women’s 4X50m freestyle team ended Friday’s final in sixth place with a new Israeli record of 1:38.52m. Zohar Shikler opened the race by improving the national mark in the 50m free, setting it at 24.80s, before Ivri, Keren Siebner and Murez completed the race.“Sixth place is amazing,” said Ivri. “We will keep working and we will also swim together in the long course European Championships.”