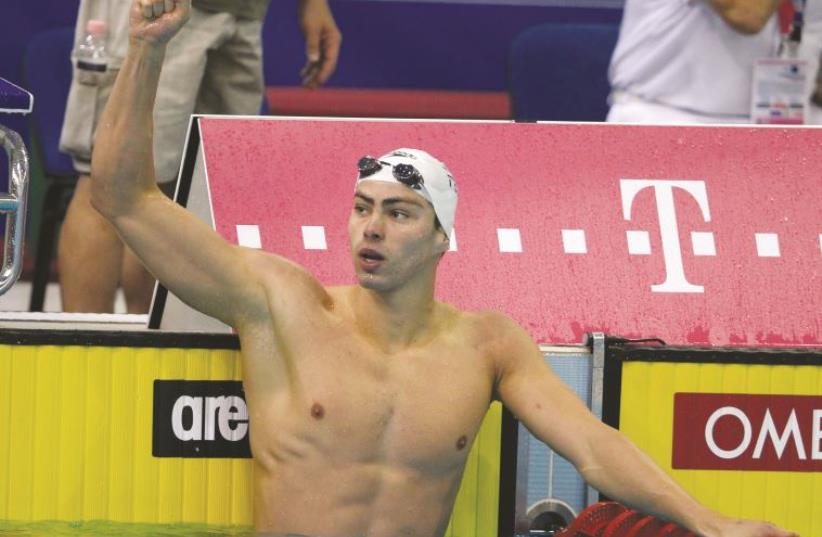 Israel’s Yakov Toumarkin registered his best result to date at the world championships on Monday
(photo credit: REUTERS)
Advertisement
Despite his impressive start to the world swimming championships in Kazan, Russia, Israel’s Yakov Toumarkin failed to advance to the semifinals in his main event, the 200-meter backstroke, on Thursday.Toumarkin was hoping to become just the sixth Israeli swimmer to reach a final at the world championships in an Olympic event, but his time of 1:58.64 minutes was only good enough for 17th place overall, nine hundredths of a second from a place in the semis.The 23-year-old had finished the 200m individual medley in 11th place on Wednesday after ending the 100m back in 12th place earlier this week. He was seventh in the 200m back final at the London 2012 Olympics, but came well short of emulating that accomplishment in Kazan.Meanwhile, American swimming great Ryan Lochte became only the second man to win titles in the same event in four consecutive world championships when he triumphed in the 200m individual medley on Thursday.The five-time Olympic champion emulated the feat of Australian Grant Hackett, who won four 1,500m titles in a row between 1998 and 2005.Victory for Lochte was secured in the final length as a powerful surge off the wall, using a new rotational technique he has introduced only over the last three months, saw him overtake long-time leader Thiago Pereira.Lochte, who first landed the 200m IM title in Rome in 2009 and has now won at least one gold at the last six editions of the championships stretching back to Montreal 10 years ago, won in one minute 55.81 seconds.The Brazilian Pereira claimed silver in 1:56.65 while Shun Wang, of China, took bronze.China’s Ning Zetao surged to the men’s 100m freestyle title, denting pre-race favorite Cameron McEvoy’s bid to succeed compatriot James Magnussen, the two-time Australian champion who was forced to pull out of the championships with a shoulder injury.Ning led from the outset, touching in 47.84 seconds, with McEvoy taking silver, 0.11s behind, and Argentina’s Federico Grabich securing bronze.China’s golden evening continued in the women’s 50m backstroke when Yuanhui Fu took gold in 27.11s.Natsumi Hoshi, of Japan, won her first global title in the 200m butterfly, clocking 2 minutes 5.56 seconds, ahead of American Cammile Adam and China’s Zhang Yufei.The United States won its second gold of the evening when 18-year-old Katie Ledecky, following her three individual wins, added a fourth gold in the 4x200m freestyle.Ledecky and Sweden’s Ida Marko- Varga were neck and neck going into the anchor leg before the American powered to gold in seven minutes, 45.37 seconds.Reuters contributed to this report.