While trade unexpected, Casspi to get much-needed opportunity with Pelicans

The 28-year-old Israeli has struggled with injuries this season. 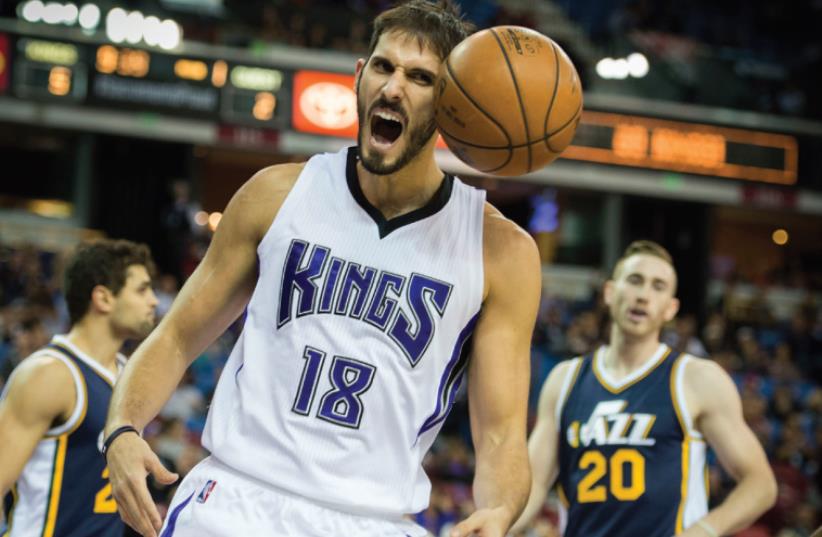 sraeli forward Omri Casspi is coming off the best season of his career in the NBA and is expecting even bigger and better things next year.
(photo credit: TNS)
Advertisement
It is essentially a two-month audition for the rest of his NBA career.When the regular season resumes on Thursday night, Israel’s first, and currently only NBA player, Omri Casspi, will enter arguably the most important stretch of his career.One which will decide if he becomes a player teams will be targeting this offseason, and as a result a very rich man. Or, alternately, whether he remains an insignificant role player who gets thrown into blockbuster trades as a make-weight in order to meet the league’s financial restrictions.That was the case on Sunday night when Casspi was traded to the New Orleans Pelicans as part of the deal that also saw All-Star DeMarcus Cousins leave the Sacramento Kings.Cousins is averaging 27.8 points and 10.6 rebounds and his pairing with new teammate Anthony Davis, who is posting 27.7 points and 11.9 rebounds per game, has set the imagination of NBA fans everywhere on fire.In exchange, the Kings received Buddy Hield, Tyreke Evans, Langston Galloway, a 2017 firstround pick and a 2017 second- rounder, with Casspi also joining the Pelicans to make the deal work financially.While he may not have been New Orleans’ target in the trade, Casspi will welcome the chance of a fresh start.The 28-year-old Israeli has struggled with injuries this season, averaging 5.9 points and 4.1 rebounds in just 22 games.He hasn’t played since January 13 due to a calf injury and crucially will become a free agent at the end of the season, completing a twoyear $6 million deal.The contract looked like a true bargain for the Kings after he ended last season with career-high averages in points (11.8 per game), rebounds (5.9), minutes (27.2) and three-point percentage (40.9%), ranking him 12th in the league in accuracy from beyond the arc.Casspi ended up playing in 69 of the team’s 82 games, missing the last six with a thigh injury.He knew that if he can build on his growth in the previous campaign, he would be in line for a big pay day when the salary cap spikes once more in 2017/18 due to the NBA’s new multi-billion TV deal, earning perhaps even twice or three times what he is making this year.Nothing went as planned this season though, with new coach Dave Joerger and lingering injuries costing Casspi dearly.After a busy summer in which he married Shani Ruderman and once more brought a group of NBA players and entertainment stars on a tour of Israel, the lean 6-foot-9 forward failed to find a place in Joerger’s rotation.Apart from a five-game stretch over one week in December in which he scored in double-digits in every game, Casspi managed to net 10 points or more only one other time this season.Casspi had kick-started his faltering NBA career in Sacramento after rejoining the Kings in the summer of 2014. After being traded away by Houston and waived by the Pelicans, he agreed to a one-year minimum deal with the Kings before receiving a two-year extension.“I want to thank the Sacramento Kings organization for the opportunity to play basketball in front of the great fans of Sacramento,” Casspi wrote on Instagram after the deal became official on Monday.“My wife and I felt in Sacramento like being home and this is something we both will cherish forever. This definitely isn’t easy for me and my family to leave, and you all know how much I love our city, organization and fans but the time has come. I want to wish nothing but success to my Kings. I will definitely will follow and cheer from afar.”But with nothing going his way this season, and with his impending free agency, Casspi has basically won the lottery by receiving an opportunity to shine in the spotlight that will accompany every Pelicans game until the end of the season.Casspi will be especially delighted at having the chance to do so with Cousins, whom he befriended during their time together in Sacramento.Cousins visited Israel in the summer of 2015 as part of a tour organized by the Omri Casspi Foundation backed by the National Basketball Players Association aimed at presenting Israel in a positive light across the world.Cousins and Davis will dominate the ball in New Orleans, but the Pelicans have little depth elsewhere, with Casspi’s main competition coming from the likes of Solomon Hill and Dante Cunnigham, who are both averaging less than 7.0 points per game.Once he is healthy, there are minutes for Casspi to be had in the Pelicans rotation.With Davis set to play at power forward, the Israeli will have to earn time on the court at the small forward and shooting guard positions.New Orleans has been mediocre in three-point attempts and percentage so far this season, a department Casspi can help in, especially with Cousins and Davis to keep defenses busy under the basket.With the Pelicans only 2.5 games behind eighth place in the West, Casspi could also finally get a first taste of playoff basketball.Casspi was part of the Houston team which reached the post-season in 2013/14, but he didn’t even play a single minute in the firstround defeat to the Portland Trail Blazers.New Orleans has 25 more regular season games even before the playoffs for Casspi to make a positive impression, one which will lead to a new contract either with the Pelicans or elsewhere.Making the most of the opportunity could change his career, and life, forever.allon@jpost.com