Maccabi registered just its third win in the past 13 continental games by eking out an 85-84 victory over Baskonia Vitoria two weeks ago. 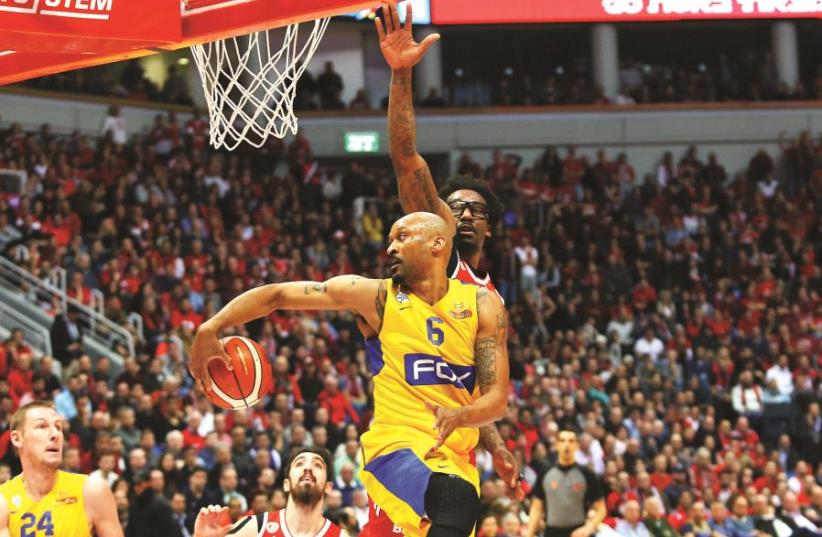 Maccabi Tel Aviv forward Devin Smith passes the ball behind both his and Amar’e Stoudemire’s back the State Cup final at the Jerusalem Arena on February 16, 2017
(photo credit: UDI ZITIAT)
Advertisement
Maccabi Tel Aviv aims to combine two straight wins in the Euroleague for the first time in three months on Thursday night, but in order to do so will need to triumph in arguably its most difficult game of the regular season at CSKA Moscow.Maccabi registered just its third win in the past 13 continental games by eking out an 85-84 victory over Baskonia Vitoria two weeks ago. The yellow-and-blue improved to an 8-14 record, three games back of a place in the top eight, which leads to the quarterfinal playoffs, with eight regular season games to play.Maccabi will need to string together what seems like an extremely unlikely winning run in order to climb up the standings, but will surely believe in its chances should it beat the reigning European champion on the road.Maccabi seemed to be gathering momentum after winning four consecutive games over all competitions, including a State Cup triumph, only to be brought back down to earth by Bnei Herzliya in BSL action on Tuesday, losing 99-92 at Yad Eliyahu Arena.CSKA is second in the Euroleague standings with a 16-6 record, but has gone only 4-4 in its past eight games. Only one of those defeats came at home though, with CSKA owning a 10-1 record in Moscow so far this season.On Wednesday, Ironi Nahariya advanced to the Europe Cup quarterfinals despite losing 80-65 to Gaziantep in Turkey. Nahariya took a 21-point gap into the second leg, but the tie was level when the hosts opened a 53-32 lead in the third quarter. Nahariya fought back and secured its progress in front of Minister of Culture and Sport Miri Regev, who accompanied the team to Turkey.After initially telling the club that it refuses to approve the team’s trip to Gaziantep, the Shin Bet (The Israel Security Agency) ultimately gave the go-ahead earlier this week, with Regev intervening to ensure Nahariya arrived on a chartered jet shortly before the game and returned to Israel as soon as the contest ended.Jonathan Skjoldebrand had 18 points for Nahariya, which faces German team Telekom Bonn next in the last eight.Elsewhere Wednesday, Hapoel Jerusalem dropped to its fourth straight loss over all competitions, scoring a season- low in points in a 62-55 BSL defeat at Hapoel Eilat.Landon Milbourne netted 16 points for Eilat, which improved to 12-8 with its sixth consecutive win.Jerusalem fell to 11-9 and will try to stop the rot when it visits Maccabi Rishon Lezion on Saturday ahead of next week’s Eurocup quarterfinal series against Gran Canaria.Jerusalem center Amar’e Stoudemire took to Instagram to attack the referees after the game.“I have witness the worst officiating in the world of basketball,” he wrote. “I’m speaking about the Israeli officials only. I hope the head of officials take a look at this game.They need to sit a review, look at replays in slow motion to see how bad this really is. Way to discourage other top player to come play in Israel.”Thursday’s games: CSKA Moscow vs Maccabi Tel Aviv (live on Sport5+Live at 7 p.m.); Fenerbahce vs Olympiacos / Red Star  Belgrade vs Galatasaray / Olimpia Milano vs Barcelona (live on Sport5+Live from 8 p.m.)