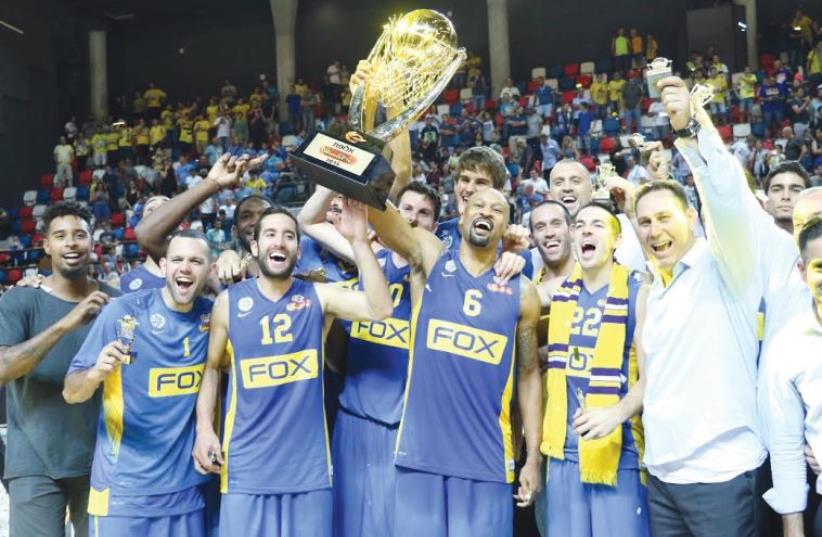 Maccabi TA celebrating Winner Cup
(photo credit: DANNY MARON)
Advertisement
It may only be the pre-season Winner Cup, but it was clear on Monday night that after last season’s experience, Maccabi Tel Aviv is taking no title for granted.Maccabi beat Hapoel Eilat 87-80 in the final at the Drive-In Arena in Tel Aviv, gaining a small measure of revenge for last season. Eilat came back from a 0-2 deficit in last season’s BSL semis to claim a 3-2 series win and send Maccabi crashing out before the league final for the first time since 1993.Maccabi also lost in the final of the Winner Cup last season and ended the campaign with just one title, the State Cup.Eilat gave the new-look Maccabi a real run for its money on Monday, before one of Tel Aviv’s old faces ensured his team wouldn’t be denied. Smith, who is beginning his fifth season at the club, scored 14 points over three minutes at the end of the third period and the start of the fourth, helping turn a seven-point deficit into a six-point lead which Maccabi wouldn’t relinquish.Smith ended the night with a game-high 26 points, while also taking nine rebounds. “I just tried to help the team out when we were struggling a bit,” said Smith.Jordan Farmar added 17 points, eight assists and six rebounds, with Guy Pnini netting 14 for Maccabi, which scored 12-of-30 three-point attempts.“Devin has a lot of experience and we saw why we missed him so badly in the semifinals last season,” said Maccabi coach Guy Goodes. “I’m happy with this win and the fact that we have opened the season on the right foot. We have reclaimed the Winner Cup after one year, but this is a brand new team and we still have a lot of work.”Maccabi will continue its pre-season in the US, leaving for North America on Tuesday ahead of Thursday’s game against Olimpia Milano at the United Center in Chicago. The sides will play once more three days later at Madison Square Garden in New York.C.J. Leslie had 19 points and eight rebounds for Eilat on Monday, with Elishay Kadir scoring 17.“We played some good basketball, but in order to beat Maccabi in a final you need to play well for larger periods,” said Eilat coach Arik Shivek.After going 15-of-25 from threepoint range in the semifinal win over Maccabi Rishon Lezion and hitting 14-of-24 attempts in the quarterfinal triumph over Ironi Ness Ziona, the yellow-and-blue lost its shooting touch in the first period on Monday. Maccabi shot just 2-of-10 from distance, but still led by four points after 10 minutes (17-13) thanks to its defensive play.Eilat scored the first four points of the second period to tie the score, but a 14-2 run opened a double-digit cushion (31-19) and looked to have put Maccabi in the driving seat. Tel Aviv found its range from beyond the arc, with three-pointers by Pnini and Farmar helping build the margin.However, Eilat never lost hope, scoring 17 of the next 23 points to close within a single point (37-36).Maccabi still had a three-point edge (39-36) at the break, but Eilat surged ahead with an excellent third quarter, leading at one stage by as many as seven points. Afik Nissim’s basket early in the frame gave the southerners their first lead since 2-0 and Leslie’s three-point play took the gap to seven points (57-50) with 3:44 minutes to play in the period.Eilat was still ahead by seven points entering the final two minutes of the quarter, but Smith almost single-handedly guided Maccabi back into the lead, scoring nine points in a 10-0 run to end the frame to give the yellow-and-blue a three-point advantage (63-60).Smith began the fourth period with another triple and it wasn’t long before Maccabi reestablished a double-digit margin. Pnini’s three with 5:50 to play opened a 76-66 lead and the captain lifted what he hopes is only the first of many titles this season.