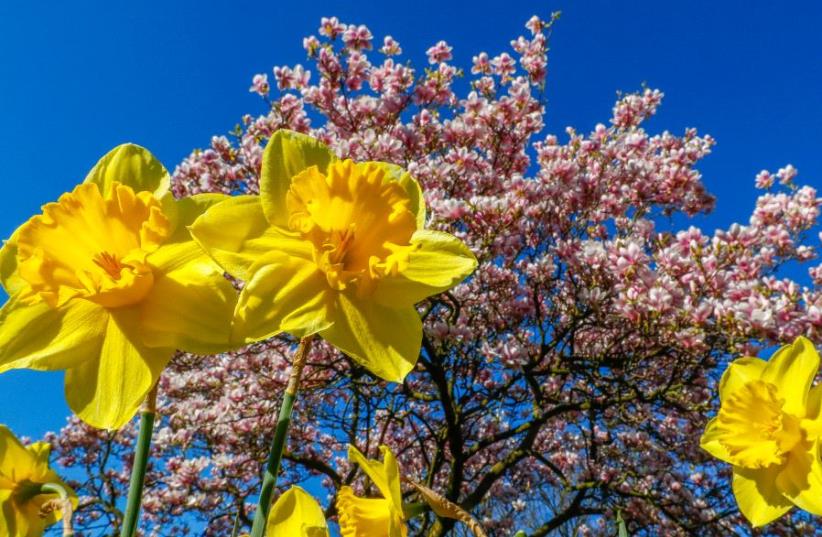 Spring
(photo credit: REUTERS)
Advertisement
According to the Encyclopedia Britannica, the concept of spring cleaning originated when people kept their houses shut tight against the cold of winter, heated them with coal, oil and wood, and illuminated them with candles. Because this was before the era of electricity, the houses were dimly lit, and the coming of spring heralded a welcome opportunity to make a dingy habitation fresh again. On the first warm, dry day of the season, the whole family pitched in to place every stick of furniture and furnishings outside the house. Then, armed with brooms and washrags, they would sweep and scrub, wash down the walls, wax the floors, air out the linens, dust books and paintings and remove all signs of soot and ash.As it happens, Passover, the first of four major festivals on the Jewish calendar, falls in the spring – at least in the northern hemisphere – and the intensive cleaning that must be done for Passover to ensure that not a single crumb of leaven is in the house may well precede the spring cleaning mentioned in the encyclopedia.Jews trace their spring-cleaning traditions back to the time of the Exodus from Egypt, to a period when the Children of Israel left the comfort of their houses and wandered in the wilderness without any place of permanence to call home. But they carried with them those things that were precious to them, including ornaments that were later used for holy purposes.For non-religious Jews, spring cleaning may mean no more than the usual cleaning of the house or, in some cases, an opportunity to take out the clothes and utensils of spring/summer stored in high places or cellars and stow away those of winter.Whatever the case, spring cleaning is not exactly a joy, even though the final result may be pleasing.For natural-born hoarders, spring cleaning is a nightmare. Both my late husband, Danny, and I were compulsive hoarders.Other than normal food garbage and containers, we hated to throw anything out, and I still do. The outcome of that was that our apartment looked like a flea market or a junk shop. One pre-Passover, we decided that enough was enough. But due to our inability to part with our collectibles, we agreed that I would go through his and he would go through mine. Each of us put aside what we thought should be thrown out. At the end of the day, we each examined the two piles of potential discards, gazed in horror at the items designated for expulsion and promptly put them all back.This year as I was cleaning for Passover, with Danny no longer around for almost 23 years, I realized that most of his junk was still there and that mine had kept increasing. Crumbs I can get rid of, but mini monuments to people who were once part of our lives or my life are much more difficult to throw away. My three Rolodexes, preserved from a pre-cellphone era, contain the names and phone numbers of many deceased people, some of whom were alone in Israel without family. I don’t know if anyone else remembers them, but when I’m shaking the dust out of the Rolodex, these names become temporarily visible, and there is a memory of each of the individuals to whom they belonged.The same thing happens with regard to all the unfiled business cards, invitations and Rosh Hashana greeting cards. It’s an opportunity to remember.While I do envy people who are perfect housekeepers and never have a speck of dust on the furniture and no superfluous books, magazines and newspapers lying around, I think that such sterility deprives them of a lot of happy memories – and even the sad ones on which we sometimes have to reflect.There’s also a benefit to having so much memorabilia lying around. On one occasion when Danny was still alive and we had a robbery in our apartment, none of our valuables were taken because the thief literally couldn’t see the forest for the trees. After making sure that the valuables were still in place, Danny breathed a huge sigh of relief, and then turned to me said, “I’ll never ask you to clean up again.”Of course one does have to clean, and this year while preparing for Passover I threw out more than ever before because I was running out of floor space, but I approached the dumpster on the street downstairs with a very heavy heart.