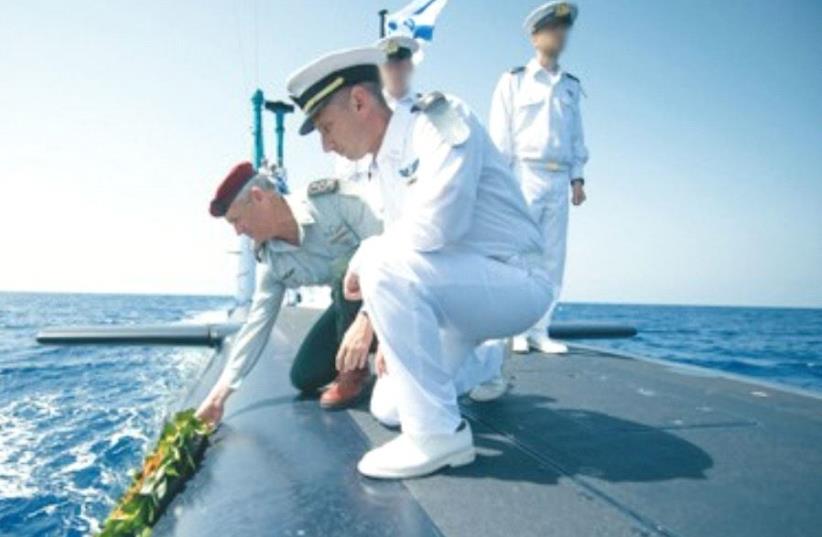 2014 Photo of Benny Gantz and Ram Rothberg
(photo credit: Courtesy)
Advertisement
There have been “substantial developments” in the submarine affair that has engulfed top aides to Prime Minister Benjamin Netanyahu and former top IDF officials, Judge Einat Ron of the Rishon Lezion Magistrate’s Court said Thursday Ron made the statement as she extended the detention of Avriel Bar-Yosef, former deputy chief of the National Security Council, and Miki Ganor, the Israel representative of German shipbuilder ThyssenKrupp.Both men are suspects in the police corruption investigation into Israel’s purchase of German- made naval vessels. Ganor is suspected of fraud, money laundering and conspiracy to commit a crime.The media in recent days have been flooded with rumors that Ganor is close to turning state’s witness, and Ron’s statement appeared to confirm that he has been providing police with against a range of high-level suspects and is near a deal to testify for the state.The affair, which police term Case 3000, also has focused on reports that Netanyahu’s personal attorney and relative, David Shimron, worked as an intermediary for Ganor.Shimron is suspected of pushing for Israel to buy submarines and other vessels valued at about $1.5 billion from the German firm over the objections of the defense establishment, including former defense minister Moshe Ya’alon.Ganor is also reportedly suspected of bribing former Israel Navy chief Eliezer Marom to help ThyssenKrupp win an Israeli tender for the naval vessels.Channel 10 on Thursday night quoted a police source as saying Ganor should get complete immunity for the extensive incriminating information he is providing against other suspects. The information reportedly includes names of senior officials to whom he handed cash bribes in envelopes.Marom and other current and former top IDF officials are rumored to be on the list of those involved in the affair’s alleged criminal activities.Along with Ganor, senior Israeli officials arrested last week in the investigation included Marom, Bar-Yosef, attorney Ron Shemer who works with Ganor and Shimron.Ganor’s negotiations with the State Attorney’s Office to become a state witness reportedly led his lawyer Nati Simchony to resign. He was replaced by Eli Zohar, an attorney for former prime minister Ehud Olmert.Other reports Thursday said former IDF chiefs of staff Benny Gantz and Gabi Ashkenazi would be called in for questioning as witnesses, though not as suspects.Police neither confirmed nor denied the reports.