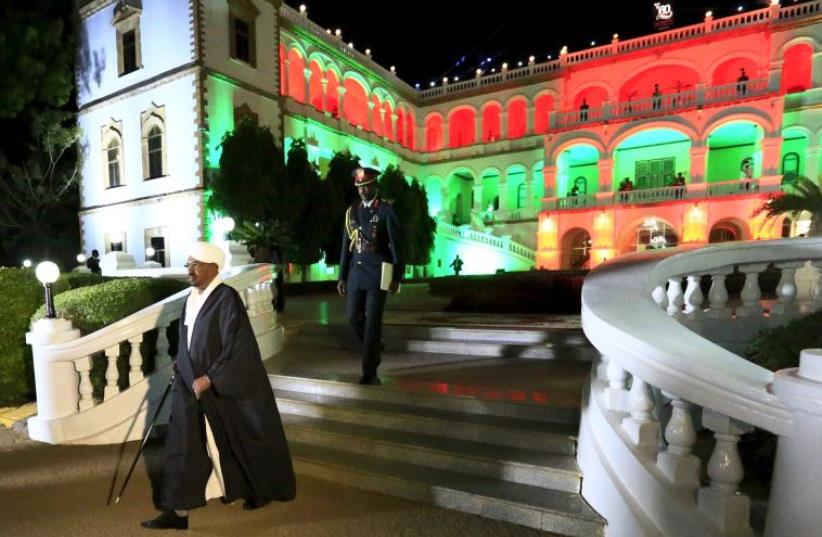 Sudan's President Omar al-Bashir arrives to address the nation on the eve of the 60th anniversary of Sudan's Independence Day in Khartoum
(photo credit: REUTERS)
Advertisement
Don’t start buying those plane tickets to Khartoum just yet.Two weeks after Sudanese Foreign Minister Ibrahim Ghandour’s surprise comment that Sudan wouldn’t mind considering the normalization of ties with Israel, The Sudan Tribune reported that the country’s Vice President Hasabo Mohamed Abdel-Rahman said on Sunday that Sudan’s leadership will not let down or betray its people, and that relations with Israel will not be normalized.Abdel-Rahman was speaking at the final session of the National Dialogue Conference, a forum initiated by Sudan’s President Omar al-Bashir – with the participation of a wide array of opposition elements – aimed at mapping out the future of the war-torn state.Abdel-Rahman’s comments were the second in two weeks by senior Sudanese officials rejecting Ghandour’s idea, which was viewed by some as an attempt to possibly move closer to the United States by floating the possibility of ties with Israel.Ali al-Sadig, a spokesman for Sudan’s Foreign Ministry, was quoted by Agence de Presse Africaine as saying last month that the foreign minister’s comments were taken out of context.“The support of the government and the people of Sudan to [the] Palestinian cause is well known. It did not change and will remain unchanged,” he added.The idea of establishing ties with Israel was raised in the committee for external relations of the National Dialogue Conference.Three years ago, Bashir – following an attack on a military factory in Khartoum that Sudan blamed on Israel – vowed that his country would never normalize relations with the “Zionist enemy.”At that time, Sudan was firmly in Iran’s camp, and was seen as a key link in smuggling arms to Hamas and Islamic Jihad in Gaza. In the interim, however, Sudan and Iran have had a falling-out. The Sunni Muslim African state has moved closer to Saudi Arabia, benefiting in return from generous Saudi aid.Earlier this month Sudan followed Saudi Arabia’s lead and severed diplomatic ties with Iran following the sacking of the Saudi Embassy in Tehran, which was triggered by the Saudi execution of a leading Shi’ite cleric. Iranian diplomats were given two weeks to leave Sudan.Sudanese journalist Wasil Ali poured cold water on any chance of improved relations with Israel, telling The Jerusalem Post on Monday that it is not going to happen as long as an Islamist government controls the country.“I don’t see a realistic path by which the Islamist government in Sudan can sell normalizing ties with Israel to its base or even the Sudanese people as a whole,” he said. “While there may be figures inside the government who see normalizing ties with Israel as a good idea, it will be near impossible for them to materialize it.”Asked whether the people in Sudan calling for relations with Israel have any real power, Ali responded, “No, they don’t.” However, he continued, “The fact that the idea is being floated publicly is significant.”Ali attributes the talk as “a sign of desperation” since the economy is terrible and the Sudanese pound is in free fall.“You think they cut ties with Iran because of principle? Hell no, they ran out of options. I think they wanted to get Washington’s attention,” he asserted. “They are addicted to this game of giving mixed signals – they say yes, then maybe, then no,” said Ali. “Bottom line.It won’t happen anytime soon.”In contrast to Sudan’s enmity toward Israel, Israel does have diplomatic ties and good relations with non-Muslim South Sudan, which broke away from Sudan and declared independence in 2011.