Edward Gelfand was found guilty of manslaughter by the Beersheba District Court in September 2013. 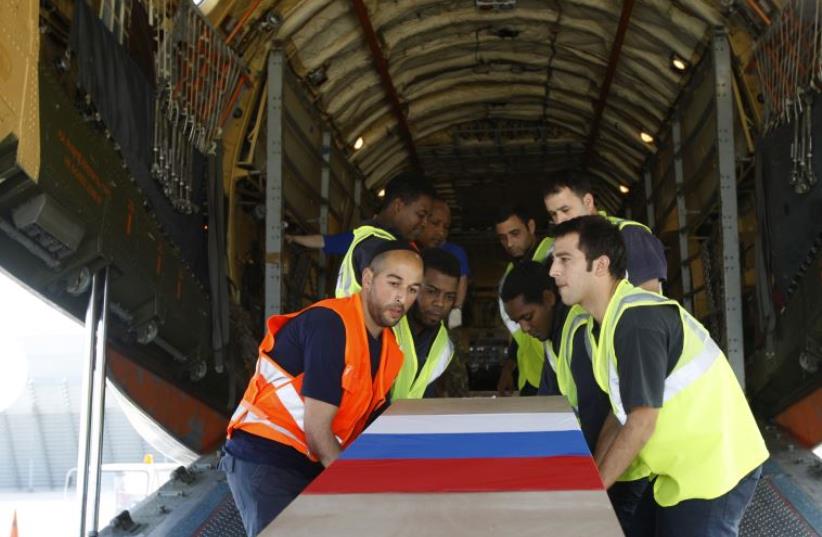 Airport workers carry one of 24 coffins of Russian tour operators, killed in a bus crash north of the Red Sea resort of Eilat, into a Russian airplane at the Ben Gurion International airport near Tel Aviv December 18, 2008.
(photo credit: REUTERS)
Advertisement
Bringing to a close one of the worst traffic accidents in Israeli history in which 24 Russian travel agents were killed when a tour bus drove off a cliff on the way to Eilat, the Supreme Court on Wednesday rejected the appeals over driver Edward Gelfand's eight year prison sentence.The decision comes only days after a similarly disastrous accident on Route 1 between Jerusalem and Tel Aviv - though the recent accident had fewer casualties.The Beersheba District Court sentenced Gelfand to the eight years in February 2014, but Gelfand appealed the sentence as to harsh and the state appealed it as too lenient.The Beersheba District Court had also cancelled Gelfand's driver's license and prohibited from driving either a public transportation vehicle or any vehicle for 25 years.Gelfand was found guilty of manslaughter by the Beersheba District Court in September 2013.The December 2008 accident was a result of Gelfand illegally and dangerously trying to pass other vehicles on Route 12, at 98 km. per hour despite an 80-km. per hour maximum speed, a recommended speed of 50-km. and numerous signs advising of dangerous curves.Eventually, Gelfand simply drove the bus off one of the cliffs. It fell 54 meters, the driver unable to break, due to the speed.Besides the deaths of the travel agents, on their way to evaluate Eilat as a tour resort, 15 others were seriously injured and another 13 experienced light injuries.Gelfand, 44, from Petah Tikva, was a veteran driver. Upon conviction, the Beersheba court said he “knew the significance of his actions” and their potential for danger.It rejected Gelfand’s statements that he had only been driving at 70 km. per hour and that he had lost control of the bus because of problems with the road conditions. It also rejected excuses that the vehicle he was trying to pass had closed him off, that an object from the other vehicle had hit the bus or in some way forced him off the cliff.The court concluded that in trying to overtake on a dangerous winding road with a 20-ton bus, all of the fault lay with him, also convicting him of the lesser crime of causing serious bodily harm.A press release by the prosecution at the time noted that the prosecution, by personal decision of then State Attorney Moshe Lador, had exercised discretion in seeking a conviction not merely for negligent homicide, a lighter crime, but manslaughter, carrying a much heavier sentence.If given the maximum punishment for manslaughter, Gelfand could have even faced 20 years in prison.