“There is clearly a growing, solid, overwhelming majority of Israelis who are unhappy about the way religion and state are linked and impacting the lives of individuals and the state." 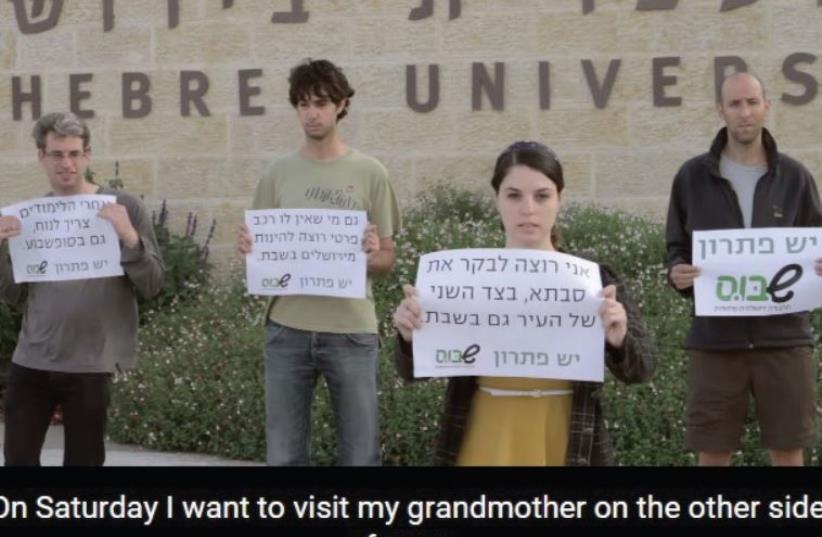 Screen grab from video on Shabus website, detailing why Shabbat transportation is a necessity for some city residents.
(photo credit: Courtesy)
Advertisement
Secular and haredi Orthodox Israelis differ on many things, but there’s one thing both sides agree on: When it comes to religious affairs, the government is failing.That’s one of the findings of an annual survey of Israeli religious identification and attitudes toward religious policy released Friday by Hiddush, a 6-year-old organization that promotes religious freedom in Israel.The survey found that 95 percent of secular respondents are dissatisfied with the government’s handling of religious issues, with large majorities favoring civil marriage or civil unions and official recognition of non-Orthodox conversions.But the survey also reported dissatisfaction with religious policy among 81 percent of haredi Orthodox Israelis, despite the fact that haredi parties regained control over the Religious Affairs Ministry and the powerful Knesset Finance Committee following the March elections. Since then, the parties have set about rolling back several reforms adopted by the previous government by removing the teeth from a law drafting haredi men into the military and repealing a conversion reform passed last year.“When the haredim are unhappy, they’re unhappy about something different than why the secular [Israelis] are unhappy,” Rabbi Uri Regev, the Hiddush CEO, told JTA. “To many of them, Israel is not giving them enough, not enforcing their prerogatives enough, not enforcing Shabbat observance.”Covering a broad spectrum of questions on religious policy and identification, the Hiddush survey reported large majorities of Israelis supporting religious policy change, as it has every year since the poll began in 2009. Sixty-four percent of Jewish Israelis support recognizing Conservative and Reform conversions — not just Orthodox, as is currently the case. Nearly three-quarters of Israelis want public transit on Shabbat. And 86 percent of respondents support haredi men performing military or civilian national service.Sixty-four percent of Jewish Israelis want Israel to enact civil marriage or civil unions, though 63 percent said they would still choose an Orthodox ceremony for themselves — including three-quarters of Conservative Jews.Rabbi Uri RegevRabbi Uri Regev, CEO of Hiddush, says an “overwhelming majority of Israelis are unhappy about the way religion and state are linked.”“There is clearly a growing, solid, overwhelming majority of Israelis who are unhappy about the way religion and state are linked and impacting the lives of individuals and the state,” Regev said. “The public clearly does not like what the Israeli government has provided it with.”The survey also found a rise in support for same-sex marriage — with 64 percent in support, compared to 56 percent last year. The jump follows national legalization of gay marriage in the United States and a stabbing attack at the Jerusalem gay pride parade in July that killed a 16-year-old girl. But a substantial portion of Israel’s governing coalition opposes same-sex marriage, making its passage unlikely.Israelis’ long-held desire for religious reform hasn’t led to corresponding government action. According to Regev, that’s because Israelis, when voting, place less of a priority on religion than security or economics. That was especially true ahead of this year’s election following a war in Gaza and much public discussion about skyrocketing housing prices. Religious issues didn’t even register in a March pre-election poll that asked about the country’s most pressing concerns. Nor have issues like marriage and conversion been subjects of major public protest.In 2013, religious policy briefly rose in prominence as Yesh Atid became the Knesset’s second-largest party, promising to draft haredim and push for civil unions. But those issues faded as Israel entered last summer’s war in Gaza. In this year’s elections, the new kingmaker was Kulanu, a party largely focused on economics. Yesh Atid, meanwhile, lost eight seats and joined the parliamentary opposition.“Yes, the majority of Israelis don’t like the way things are. Yes, they want religious freedom and equality,” Regev said. “But should that be the condition for sitting in the government? No. The challenge is how do you translate passive support and understanding of the issues into mobilization.”