Born in Ukraine, Svetlana made aliyah with her mother and maternal grandparents when she was three years old.

Svetlana Ladigin is a young woman who is determined to succeed against all odds.

Born in Ukraine, Svetlana made aliyah with her mother and maternal grandparents when she was three years old. They settled in Haifa, but assimilation was not easy, and Svetlana says that there were many stereotypes and prejudices against new immigrants from the former Soviet Union during the ’90s.

Her mother’s master’s degree in mechanical engineering from Ukraine was not recognized and she worked as a cleaner to support the family. Eventually, she trained and found work as a legal secretary.

“This was a very difficult time for all of us,” says Svetlana. “But my mother knew that I would have much better opportunity growing up in Israel.”

While in elementary school, Svetlana attended a public school during the day and went to a Russian school in the evening so that she would not forget the language and culture. In third grade, she was placed in a gifted program and in high school, she was in honors classes in math, science and English. 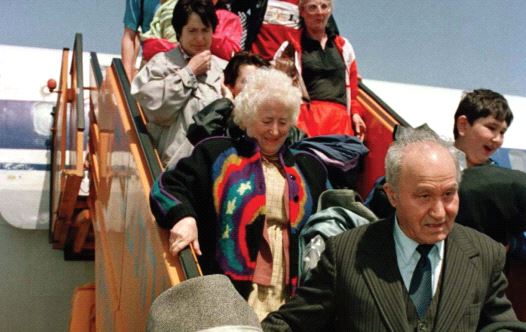 “I was an only child, and the passing of my mother and grandmother left me and my aging grandfather completely alone.

“The Pre-Atidim program for excellent students was a wonderful solution for providing extra lessons while I was by the side of my mother and grandmother,” says Svetlana. “It was here that I learned to hone my critical thinking skills and develop creative thinking and studied for the advanced matriculation exams.”

Given her family situation, Svetlana could have been exempt from army service, but she chose to serve.

“I wanted to give back to this country that had given me so much,” she says. She received lone soldier status and permission to work throughout her service. She went home every day to check on her grandfather.

Svetlana served in a classified intelligence unit for two years. Upon completing her service, she worked for a defense company.

“I already knew that I wanted to go to the Technion-Israel Institute of Technology,” explains Svetlana. “Although I worked from age 14, I used this money to help my family. I had no idea how I would afford university or support myself. I just knew I would do it.”

Svetlana was accepted to the Technion and chose to major in computer science and math. Remembering the assistance she received from Pre-Atidim, she applied to Atidim, which helps bright, motivated students from less advantaged backgrounds get a university degree in engineering or the sciences and integrate into the workforce.

“I simply could not keep up with the intense study schedule and keep on working,” says Svetlana. “It was either one or the other.”

“Atidim was there for me,” she says easily. “With their holistic support, which included a tuition scholarship, living expenses, tutoring and an academic counselor, I could now invest all of my time studying, without the constant financial worries.”

During her freshman year, Svetlana lived in the dorms, but traveled one hour each way, every day, to visit her 95-year-old grandfather, who now had a full-time caretaker.

AS PART of her volunteer work in her freshman year – a requisite for being in Atidim – Svetlana tutored at-risk teens in math and English. One young girl’s story really touched her and made her understand how important it is to give girls from difficult backgrounds and under-resourced communities the courage and confidence to get an education.

“This girl was really smart,” explains Svetlana, “but she did not believe in herself, and no one ever encouraged her to invest in school. Not her parents or her teachers or her friends. She had no role models at all.

“When I asked her what she wanted to be when she grew up, she said a secretary or a supermarket cashier. I was shocked, as my mother and grandparents always encouraged me to believe in myself and in my abilities, and to reach for the stars.

“I worked with her and tried my hardest to give her confidence, to make her see how smart she was and how important it was to pursue an education. I wanted her to know how to dream and to reach for that dream.”

This is exactly the premise of Atidim’s new Step UP program which empowers talented young women from underserved communities to get engineering degrees at Israel’s best universities. “There are many really smart girls out there that need support to realize their potential,” says Svetlana.

The pandemic was traumatic for Svetlana. She caught the COVID-19 virus when she was visiting her grandfather in the hospital and was sick for a month. Because of this, she was not able to see him, and by the time she recovered it was too late, her grandfather had passed away.

The bright spot was when she was accepted to a student job at Red Hat, the world’s leading provider of enterprise open source solutions, including high-performing Linux, cloud, container and Kubernetes technologies.

A major part of the Atidim program is integration into the hi-tech workforce while participants are still in college. Due to the work she missed while she was sick, Svetlana was worried that she didn’t have a high enough GPA to get accepted to a company.

“The Atidim director pushed me to submit my résumé, and instead of getting no offers I got two amazing offers from global companies,” she says.

Svetlana is now in her senior year at the Technion and loves working at Red Hat. She is an offensive security engineer, creating a platform to automate cyber security penetration tests for cloud services.

The members of her multinational team are from all over the world, from Ireland to Spain to the US to France. “My manager is Israeli and my team leader is Australian and the work is done in English,” she says. “The company has great people and the vibe is open and inclusive. People can express their opinions and ideas and really feel listened to.”

As a result of her work at Red Hat, Svetlana wants to be a computer security researcher when she graduates. She looks forward to continuing at Red Hat as a full-time employee.

Svetlana is confident that she’ll continue to do her best at work and in life, and that she will always be able to rise to new challenges.

“I think the most successful people are those who keep going, even if they fail,” she says with a smile. ■