Switzerland finances organizations in Israel and the Palestinian territories that call for the annihilation of Israel and for the death of Jews, according to a Basler Zeitung report. 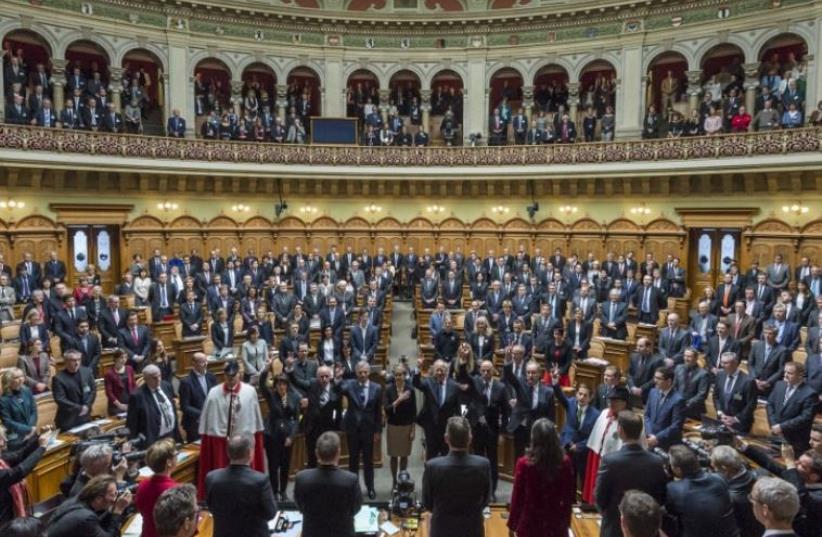 Swiss parliament in Bern
(photo credit: AFP PHOTO)
Advertisement
A February article in the Swiss daily Basler Zeitung reported that some of the nearly $60 million its government has sent in support of Middle East projects funds initiatives that call for the destruction of Israel and the murder of Jews.“Switzerland finances in different ways organizations in Israel and the Palestinian territories that call for the annihilation of Israel and for the death of Jews,” wrote Dominik Feusi, senior editor of Basler Zeitung.According to the report, since 2013, the Swiss government has funneled nearly $700,000 to a human rights office in Ramallah that has functioned as a front organization, to avoid criticism by Western countries. The office is funded by Switzerland, Denmark, the Netherlands and Sweden, and seeks to cover up the antisemitic work of its partner NGOs, the report said.Another organization supported by the Swiss government, the Badil Resource Center for Palestinian Residency and Refugee Rights, advocates a boycott against the Jewish state, the report said, adding that doing so contradicted the country’s endorsement of a two-state solution to the Israel- Palestinian conflict.Switzerland has long faced criticism for its refusal to outlaw Hezbollah and Hamas as terrorist organizations.In December, it participated in and helped finance a two-day conference in Geneva that included Hamas.Other organizations mentioned by the report as recipients of Swiss funding include the Palestinian Center for Human Rights (PCHR), which routinely calls for the arrest of Israeli politicians and compares Israel with the former apartheid regime in South Africa, and Al-Haq, a Ramallah-based legal center that promotes lawfare against the Jewish state.The report triggered sharp criticism by the Jerusalem-based watchdog organization NGO Monitor on Monday, which called for reforms of the Swiss government’s public expenditures.“Parliamentary oversight over and investigation of Swiss government funding of these anti-peace NGOs is very important,” said Olga Deutsch, director of the European desk of NGO Monitor. “Other countries are doing the same and the Swiss MPs can set an example. It is clear that the millions of Swiss francs going to NGOs, including hate groups through secret processes, cannot continue.”According to NGO Monitor, PCHR founder and director Raji Sourani has admitted to connections with the Popular Front for the Liberation of Palestine.“[It is] alarming that $2.38 million were granted to a Palestinian human rights organization with alleged ties to a terrorist organization, PFLP,” said Deutsch. “Swiss and other European governments need to do a better job at reviewing whom they support and endorse. More direct cooperation with their Israeli counterparts would probably be the best first step in that direction.”According to the report, the Swiss government’s consultant on the distribution of funds to Palestinian nonprofits is Mustafa Mari, a human rights researcher at Birzeit University who supports boycotting Israel.The Swiss government has not been transparent about whether their funding streams entail graft, the article said. In response to reports last year about alleged financial misconduct involving Middle East projects, the Swiss parliamentary body Bundesrat rejected a motion from MP Christian Imark in 2016 to ban taxpayer money for initiatives that spread “racism and antisemitism.””Switzerland works together with organizations that uphold democratic values and principles and work for human rights and humanitarian international law,” said Silvia Müller, a spokeswoman for the Swiss Federal Department of Foreign Affairs. “Switzerland chooses its partners on the basis of their expertise and their contribution to a desired goal. With the aid of contractual mechanisms, it is guaranteed that Swiss money only serves the attainment of the agreed upon goals.”