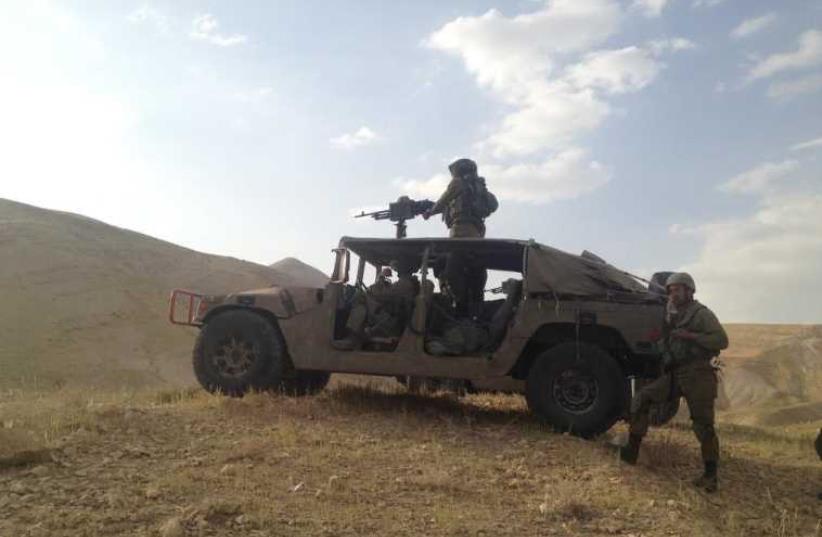 Reconnaissance company members attached to the 401 Armored Brigade use a humvee in an exercise last week
(photo credit: IDF SPOKESPERSON'S UNIT)
Advertisement
When the reconnaissance company that is attached to the 401 Armored Brigade used humvee vehicles to evacuate wounded soldiers from Gaza last summer, the unit’s officers realized that they had found a new and improved tactic to move around in enemy territory.The 401 reconnaissance company’s missions include traveling deep into combat arenas, ahead of the tanks, monitoring and neutralizing threats, and acting as lookouts, sending back intelligence to the advancing armor.When it is not training for war, the unit conducts routine security operations in the West Bank and Jordan Valley throughout the year.Traditionally, the unit’s members moved around on foot, but now, according to Maj. Yoav Amir, commander of the company, that is changing.“We completed an exercise using humvees last week,” he told The Jerusalem Post. “The humvee is a light, mobile, and swift platform. It can drive without lights in the dark, and we practiced nighttime maneuvers,” Amir added. Soldiers drilled “operational driving,” simulating drives in an arena like southern Lebanon at high speeds at night, firing the vehicle’s rooftop MAG machine gun, and disembarking to engage threats, Amir added.“These teams would go deep into Lebanon, or other places, if needed. They can move in humvees, in a low-profile manner. They are not noisy like tanks or armored personnel carriers. They can reach places other vehicles cannot,” Amir said.Since this tactic was first used during Operation Protective Edge last summer, “we have developed it a lot,” the commander said. Now, the company has a rapid evacuation team, as well as two combat teams that travel in humvees to get to their targets.Once they reach their destinations, the teams can either collect intelligence and return, or set up a lookout.They might also be ordered to ensure that routes are open for the Merkava Mark IV tank battalions trailing behind, and that roads are free of land mines and other threats. Alternatively, the company could go behind enemy lines to destroy a Hezbollah rocket-launching base.Some of the recent training was aimed at ensuring that soldiers inside the humvees do not make navigational errors during their speedy nocturnal maneuvers.Since the humvee is unarmored, it will not be sent into built-up areas that are likely to be filled with Hezbollah cells lying in ambush, armed with antitank missiles. But the vehicles can arrive on the outskirts of such areas, said Amir.“If you see one passing you at night, by the time you understood what happened, it will be gone. You can see four fly past before you know what happened, and this can look quite threatening,” he added.Lt. Matan Gdaliyahu, head of the unit’s training company, said the emphasis on training in humvees is new.“We are doing a lot more mechanized drills. Until now, we were mainly drilling maneuvers on foot. In the modern battlefield, we need much faster maneuverability,” he told the Post.A whole section in the unit now trains drivers to speed around at nights without lights, as well as instructing humvee commanders on guiding the vehicles correctly.“Our understanding is that we will have to pressure the enemy as fast as possible,” he added. “Our second week of training included a concluding live-fire drill. We had to bring the vehicles to the training area and ensure they are functional. This requires much more preparation than maneuvers on foot, but it’s worth it. We are carrying out training that did not exist previously.